– The House Democrats’ Sit-In Is Everything Wrong With the US Government:

United States — Democrats have decided to take a stand so tough, they’re staging a sit-in on the literal floor of the House in protest — not over the expansion of war; not over accepting refugees or deporting immigrants; not over increased domestic surveillance, which recently and yet again proved worthless to prevent a mass shooting; nor over anything productive or effective in any significant way.

No, Democrats are taking a stand because they want to strip those listed on the ubiquitous and utterly flawed terror watch list of the right to purchase legal firearms.

“The time for silence and patience is gone,” Rep. John Lewis, spearheading the sit-in, announced, as Reasonreported. “The American people are demanding action. Do we have the courage, do we have the raw courage to make at least a down payment on ending gun violence in America?”

Perhaps it slipped Lewis’ mind that even he once landed on the notorious, if not opprobrious, terror watch list — a footnote so telling of its arbitrariness and extent, it should disqualify any admonishing moral stance he has to offer. Mediaitedug up the report of Lewis’ no-fly status from the bowels of CNN’s old news from 2004, which explained the congressman’s difficulty once finally finding out the mistake:

Indeed, the so-called civil rights champion, Lewis, penned a letter in 2014 decrying the lack of an appeals process for the wrongly-listed, noting there exists “no effective means of redress for unfair or incorrect designations.”

Arguments between pro- and anti-gun advocates must be set aside to grasp the pertinence of the matter the Democrats have chosen to champion — guns have nothing to do with what’s actually at stake.

Nearly half the people on the government’s various watch lists were designated as having “no recognized terrorist group affiliation,” the Interceptreported from documents obtained in 2014 — meaning they had no business landing on such lists, whatsoever.

Linking any constitutionally-protected right with a person’s status on such inaccurate, sweepingly general lists could be perilous for a succession of other rights down the road.

Democrats are staging a sit-in on the House floor. They refuse to leave until our Constitution replaces due process with secret lists.

So misplaced is this effort by the sit-in Democrats, the American Civil Liberties Union felt compelled to write a letter to senators on Wednesday vehemently opposing the proposed legislation, stating:

“The ACLU strongly urges you to vote against the Collins Amendment because it uses the error prone and unfair watchlist system, along with vague and overbroad terms, as a predicate for proceeding to deny a firearms permit.”

The letter warned relying on such lists “would open the door to arbitrary and discriminatory government action.”

Note, too, the ACLU does not oppose governmental regulation of firearms in the interests of public safety, among other issues, “as long as it is reasonably related to … legitimate government interests,” the letter explains.

Glenn Greenwald lambasted a proposal by Democrats to institute yet another list — this time, with a dystopically secretive bent — on Tuesday in an article for the Intercept, saying:

“To justify this new list, Democrats, in unison, are actually arguing that the U.S. government must constrain people whom they are now calling ‘potential terrorists.’ Just spend a moment pondering how creepy and Orwellian that phrase is in the context of government designations.

“What is a ‘potential terrorist’? Isn’t everyone that? And who wants the U.S. government empowered to unilaterally restrict what citizens can do based on predictions or guesses about what they might become or do in the future?”

Apparently, the U.S. government and its selectively moral Congress members do — and they hope beyond hope you’ll be too distracted by their sit-in on the floor of the House and the hotly contentious gun topic to notice that’s precisely the ultimate goal. 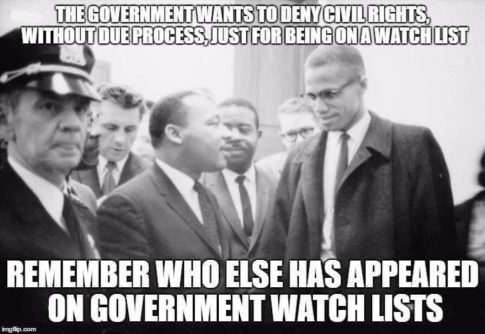