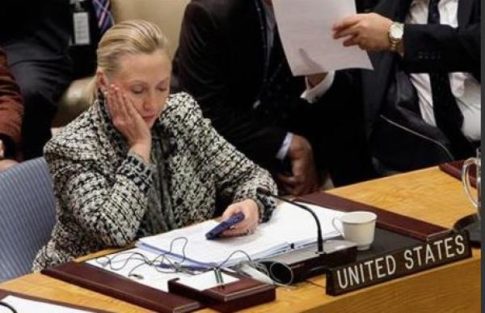 Emails released under court order Wednesday to Judicial Watch show that in December 2010, State Department technical staff had to disable software on their systems intended to block phishing emails that could deliver dangerous viruses. The reason: The State Department was trying to resolve delivery problems with emails sent from Hillary Clinton’s private server.

Deputy chief of staff Huma Abedin and Hillary both used Clinton’s private server, and as AP reports, both had complained that emails each sent to State Department employees were not being reliably received.  “This should trump all other activities” Ken LaVolpe, a senior technical official told other IT employees in a December 17, 2010 email. Days later another email was sent by State Department official Thomas W. Lawrence saying that Abedin was personally asking for an update about the repairs.

After technical staffers turned off security features at the State Department, Lawrence cautioned in an email “we view this as a band-aid and fear it’s not 100 percent fully effective.” State Department spokesman John Kirby clarified that the emails describe “a series of troubleshooting measures to the department’s system, not Secretary Clinton’s system, to attempt to remedy the problem.”

On January 9, 2011, an IT worker was forced to shut down Clinton’s server because he believed “someone was trying to hack us.” The worker then went on to write “we were hacked again so I shut (the server) down for a few min” in what was one of several occasions where email access to Clinton’s blackberry was disrupted because the private server was down according to the documents.

AP went on to add that last year it reported that on August 3, 2011, Clinton received infected emails disguised as speeding tickets from New York. The emails instructed recipients to print the attachments, however opening any attachment would have allowed hackers to take over control of the victim’s computer.

So to recap, Clinton’s private server was being hacked, and the State Department decided that it was a good idea to disabled security software on its government systems just to allow Hillary and Huma’s emails through. This begs the question of how far the hacking goes, did the State Department just allow hackers unlimited access when it disabled security software to accomodate Hillary?

As a reminder, the State Department did release a report slamming Hillary for ignoring internal guidance that her email set up broke federal standards. Alas, it is clearly too little, too late at this point. Also of note, although Judicial Watch is making headway in gaining access to email documents such as AP reported on above, no further answers will be revealed in the sworn testimony of Brian Pagliano, the man believed to have set up and maintained Clinton’s private server. In a deposition as part of one the civil cases involving Judicial Watch, Pagliano invoked his Fifth Amendment rights against self-incrimination more than 125 times.