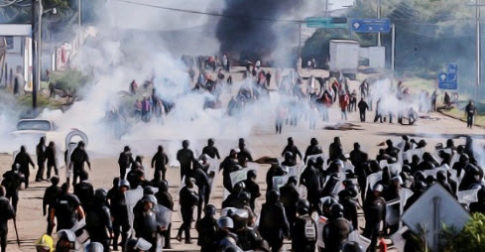 – Fed Up With The Corruption: Mexico on Brink of Revolution:

Anti-government sentiment is mounting after police forces opened fire on a teacher protest in Oaxaca on Sunday, killing at least eight.

Since then, two high level government officials from that state, Oaxaca Minister of Indigenous Affairs Adelfo Regino Montes and Secretary of Labor Daniel Gutierrez, have resigned in protest of the “authoritarian actions that repress and kill Oaxacan people who defend their rights and the government’s negligence to any possibility of dialogue,” as Gutierrez put it.

On Wednesday, members of the medical organization Yo Soy Medico 17 from 32 states joined the ongoing strike, stating their opposition to Peña Nieto’s health reforms, which they say are a “disguised way of privatizing health in Mexico,” according to TeleSUR.

Further, the group —which translates to “I’m a Doctor”—has vocally condemned the killings and what they describe as intimidation and repression by authorities and organized crime. “According to doctors,” TeleSUR explains, “as violence has increased in Mexico they have suffered the consequences of crimes like kidnappings, enforced disappearances and killings that have gone unpunished by authorities.”

These protests have been met with violent government repression, including the recent arrest of two of the union’s leaders. But members explain that the government’s opposition to the teacher’s union runs far deeper.

A social media post by the Twitter handle @puzzleshifter has been shared widely as a valuable explainer of the forces shaping the current violence.

“Why would [Peña Nieto] want to fire teachers en masse? Because they teach social justice curriculum as guaranteed under gains made in the Revolution,” they write. As the post explains, these teachers, known as “Normalistas,” work at the same “Escuelas Normales” that the 43 disappeared Ayotzinapa students were training to lead.

Normalistas are passionate about their profession and have a strong desire to impact the lives of children in dire rural poverty in Mexico. Many who become teachers, grew up in same communities/conditions as children they seek to teach – about their ability to change conditions.

According to the Mexican Constitution, rural [Indigenous] children have as much right to education as the children of the wealthy.

This has resulted in teachers who enter the profession, specifically to teach the most left out kids, in Mexico’s society.

For this, over the years, rural teachers have been accused of bringing kids revolutionary ideas. Many say, of course, that’s our job!

So there’s been a constant battle to stay true to the goals of the Revolution to teach rural kids and Central gov to reign them in.

The government violence has also been criticized by the National Indigenous Congress (CNI) and the Zapatista National Liberation Army (EZLN), which issued a joint communique on Monday blasting the “cowardly police attack,” and assuring the teachers, “you are not alone.”

“We condemn the escalation of repression with which the neoliberal capitalist reform, supposedly about ‘education,’ is being imposed across the entire country and principally in the states of Oaxaca, Chiapas, Guerrero, and Michoacán,” the missive states.

“We call on our peoples and on civil society in general to be with the teachers who resist at all times, to recognize ourselves in them,” it continues. “The violence used to dispossess them of their basic work benefits with the goal of privatizing education is a reflection of the violence with which the originary peoples and rural and urban peoples are dispossessed.”

The fight seems to be just beginning as the union is vowing to “stay here until the government is willing to talk.”

As one teacher from Nochixtlán toldDemocracy Now! on Tuesday: “If tomorrow the government is open to dialogue, then the conflict ends. The governor wants what he calls educational reform. And what we want is a dialogue for the kind of change that the people require, the kind that meets their needs.”

The unnamed educator continued: “If you go to our communities, there are many needs. How are the kids doing? The children can’t go to school to learn. All they think about is eating, because they don’t eat. No one can learn if they don’t sleep well, if they walked many miles to go to school. So the government should go and see what happens firsthand. And until there is a dialogue, we will not end our protest demanding educational reform.”

“And who will revive our dead?” they added. “The dialogue won’t bring our dead back to life. And those who are imprisoned, there aren’t just five or 10, there are thousands.”

As Gustavo Esteva, founder of the Universidad de la Tierra in Oaxaca, further explained, “This is a very complex war. It doesn’t—it did not start in Oaxaca. The teachers’ struggle, it is a global struggle. It started in Colombia, in Brazil, in Chile, in the U.S.—everywhere.”

“[W]e are in a war trying to say a very firm no to this kind of education. It is useless instruction,” he added. “And we are saying no very firmly to all the so-called structural reforms that mean basically a change of only ownership. They are selling our land, our territory. The people are resisting. And then we are resisting with them to oppose this kind of operation.”