The German government has agreed to ban fracking for shale gas for an indefinite period, but would allow test drilling to be carried out if state governments permit it, news agencies reported on Tuesday.

The two parties in Germany’s ruling coalition – the Christian Democrats (CDU) and the Social Democrats (SPD) – agreed to what is being called an “indefinite” ban, but the agreement calls for a review in five years, leaving the door open for a possible lifting of the ban.

Parliament must still approve the ban.

Environmental groups are not satisfied with the agreement, and have vowed to step up opposition.

“The coalition’s agreement on a fracking permission law is hair-raising. The law must be stopped and replaced with a true fracking ban,” Hubert Weiger, who heads the environmental group, said in a statement carried by Reuters.

France has banned fracking, while the United Kingdom has gone back and forth over the issue. In late May, a local English government approved the first fracking permit in Western Europe for natural gas since 2011.

The last fracking incident in Britain occurred in 2011, when the U.K.-based oil and gas company Cuadrilla Resources admitted that two minor earthquakes in north-west England had been caused by the company’s use of the controversial drilling practice.

France’s Socialist government has been under pressure from environmentalists not only to ensure that fracking never takes place on French territory, but also to ensure that no fracked gas enters its territory. 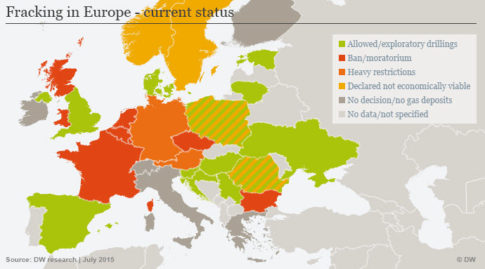 Concerns have recently been expressed by some members of French parliament that American LNG exports to Europe have contained natural gas that is 40 percent shale gas—which environmentalists and some lawmakers argue contradicts France’s own ban on shale gas exploitation using hydraulic fracturing.