– Question of the Day: When Was the Last Time the Yield on German 10-Year Bonds Went Negative?:

That is sort of a trick question. Most likely you were not alive, no matter how old you are.

As translated from Spanish, my friend Guru Huky posted the answer on his blog today: And the last time the German bond stood negative was …. surprise surprise. 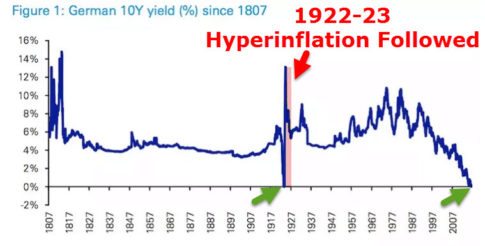 Yesterday the yield of German bonds entered negative territory. Some will think that all is well and that falls within what could be considered normal, but that there is nothing like taking a look back.

The last time the German bond slipped into negative return was between 1922 and 1923. At that time in Germany succumbed to hyperinflation which left without any value to German bonds yields marked not simply because nobody bought them for those two years.

Unless you are at least 94 years old you were not born yet. If you are 100 years old and have a memory of German bond yields at age six, I salute you.

This is precisely how distorted thing are. A currency crisis awaits. What shape it takes and where it strikes is still unknown.

When the Fed talks of “uncertainty” this is what they really imply.

Alois Irmaier made the following prediction in the 50ties: