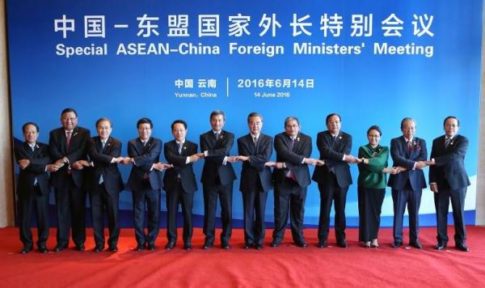 “We expressed our serious concerns over recent and ongoing developments, which have eroded trust and confidence, increased tensions and which may have the potential to undermine peace, security and stability in the South China Sea.” That is what was said in a statement issued by the Association of Southeast Asian Nations (ASEAN)… before it was immediately retracted.

Following a China-ASEAN meeting in the southern Chinese city of Yuxi, an ASEAN statement was issued by Malaysia’s Foreign Ministry that expressed deep concerns over tensions in the South China Sea, however just hours later the statement was mysteriously retracted.

The original statement included comments that took some not so subtle shots at China’s activity in the region, and given the fact that the statement was immediately retracted, it is clear that China wasted no time in explaining to to everyone involved who was in charge.

Here are some of the comments that were in the initial statement upon release, per AP.

“We expressed our serious concerns over recent and ongoing developments, which have eroded trust and confidence, increased tensions and which may have the potential to undermine peace, security and stability in the South China Sea“

“We emphasized the importance of non-militarization and self-restraint in the conduct of all activities, including land reclamation, which may raise tensions in the South China Sea“

According to TIME, it takes consensus of all 10 members for ASEAN to issue any statement, and one senior regional diplomat said that in the minutes after the ASEAN statement went out, Beijing lobbied to have the statement retracted.

“When the dragon roars, the little countries need to stay away from the fire coming out of its mouth. We have no choice but to acknowledge this political reality.” said the diplomat.

Perhaps the countries initially had an extra shot of courage after US Defense Secretary Ash Carter’s visit to Singapore earlier this month, where Carter said that the US would remain the most powerful military and main underwriter of security in the region. Whatever the case, Carter was not in that meeting, and the little countries ran out of resolve when the big dragon roared. The US may want to tread very lightly in its assumption that the region will support its role in the South China Sea, because whether it is factual or not, China knows it can twist enough arms for that not to be the case if ever push really came to shove – which is on its way – and if the region unifies against the US being involved, it will be very difficult to justify still being there. Not that it has ever stopped them before.