Update: The West Yorkshire Police reports that Jo Cox has died as a result of her injuries. The police also adds that a full probe is under way to establish motive. It remains to be seen if the Brexit referendum vote will be delayed as a result of this death.

Update: 52-year-old man arrested after Labour MP Jo Cox was shot in street outside her constituency surgery has been named as Tommy Mair.  A brief public data history search reveals that Mair had psychological problems:

Thomas Mair, 46, started volunteering at the park after learning about the opportunity through the Mirfield-based Pathways Day Centre for adults with mental health problems.  He said: “I can honestly say it has done me more good than all the psychotherapy and medication in the world. “Many people who suffer from mental illness are socially isolated and disconnected from society, feelings of worthlessness are also common mainly caused by long-term unemployment.

“All these problems are alleviated by doing voluntary work. Getting out of the house and meeting new people is a good thing, but more important in my view is doing physically demanding and useful labour.

“When you have finished there is a feeling of achievement which is emotionally rewarding and psychologically fulfilling.

“For people for whom full-time, paid employment is not possible for a variety of reasons, voluntary work offers a socially positive and therapeutic alternative.”

Update: Responding to unconfirmed allegations the shooter shouted “Britain First!” before the incident, the group Britain First has said:

A single eyewitness also claimed (unconfirmed) that the assailant “apparently” shouted “Britain First” during the attack, but this is pure hearsay at the moment. 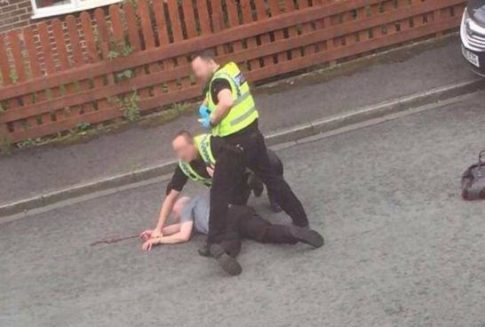 There is LOTS of use of words such as “apparently” and “allegedly”.

Britain First obviously is NOT involved and would never encourage behaviour of this sort.

As an MP and and a mother, we pray that Jo Cox makes a full recovery.

Update:  As BBG adds, campaigning was suspended in Britain’s European Union membership referendum after news of the attack, which happened just before 1 p.m., came out.

Update: Here is a photo of Jo Cox’ assailant getting arrested. As SkyNews adds, “West Yorkshire Police said a 52-year-old man was arrested in connection with the attack, which happened near the town’s library. Witness Hichem Ben Abdallah said a man “was kicking her as she was lying on the floor.” He said that after a bystander intervened, the attacker produced a gun, stepped back and shot her twice.”

With tensions in the UK already running high ahead of next week’s historic Brexit vote, moments ago the Guardian reported that Jo Cox, the MP for Batley and Spen, was in critical condition after she was shot and stabbed in her West Yorkshire constituency.  The Labour politician was injured in the attack and there is an ongoing police operation in the area, a witness told the Press Association.  It is unclear who the assailant was or the motive.

Very concerned about reports Jo Cox has been injured. Our thoughts and prayers are with Jo and her family.

The following statement has been released from West Yorkshire Police:

“At 12.53 today, police were called to a report of an incident on Market Street, Birstall, where a woman in her 40s had suffered serious injuries and is in a critical condition. A man in his late 40s to early 50s nearby also suffered slight injuries.

Armed officers attended and a 52-year-old man was arrested in the area. There are no further details at present. Police presence in the area has been increased as a reassurance to the community.”

The Labour Party have released the following statement:

“We’re aware of the incident that happened this afternoon. All our thoughts are with Jo Cox and her family. We cannot give any further updates at this time.”

Armed officers are reportedly on the scene in Birstall, near Dewsbury, West Yorkshire. West Yorkshire police said in a tweet: “We are aware of a serious incident ongoing in Birstall. Details will be released in the press in due course.”

The attack reportedly took place near the town’s library, where the MP holds advice surgeries. Yorkshire ambulance service said it was aware of an incident but had no further information.  According to a Labour source, Cox was shot and stabbed after she had conducted her morning surgery for constituents.

Another person, who has not been identified, was also injured and both were taken to hospital, the source said. The attack was said to have taken place sometime after 1pm.

The whole incident lasted about 15 to 20 minutes according to witness Mr Abdallah, and another bystander told him Ms Cox had also been stabbed.

He added: “He was kicking her and he was pulling her by her hair. A very courageous man from the dry cleaners tried to restrain him and he couldn’t stop him because all of a sudden he pulled a gun. She was a standing still target for him when he shot her.”

Witness Clarke Rothwell told BBC News said there was an altercation between a man carrying a gun and Cox. He purposefully targeted her, said Rothwell, who runs the cafe next to the library where the incident took place.

“He shot this lady and then shot her again,” he said. “He lent down. Someone was wrestling with him and he was wielding a knife and lunging at her. Three times she was shot. People were trying to help her. Then he ran off down a one-way street. Me and my mate drove round to try and find him.”

Images have appeared of a man being tended to by police near the shooting of Jo Cox MP https://t.co/6vBAevSxy2

According to Sky News, which cites a witness: “All of a sudden this guy in the baseball cap pulled  a gun. It looked like a gun from the First World War, or a handmade gun. He fired the first shot. I  ran away, as everybody else did. All of a sudden we heard the second shot.”

Witness: “Her legs were in aid triangular way, like someone on a  bed. She was leaning a bit on the left-hand side, with her hair at the  back. Everybody was crying, the women. I’m absolutely shocked”

Witness: “All of a sudden we heard the second shot. Obviously, we remained in the restaurant for a couple of minutes. Then we decided to venture out and see what had happened. hen we went out and at first I didn’t recognise that it was Jo. A lady was on the  floor, her face bleeding.

Was Brexit a motive? Sky says that according to a witness report, the assailant shouted “Britain First“.

It appears the assailant may have been caught.

A 52-year-old man has been arrested after MP Jo Cox suffered serious injuries after being shot in Birstall, police said – PA

More as we get in this developing story