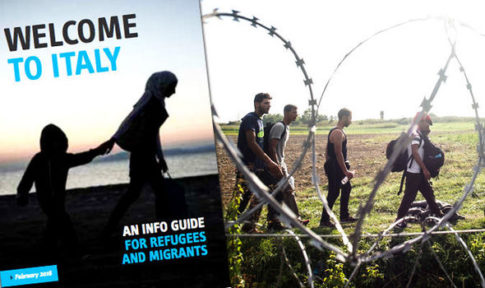 The handy book offers a complete route across Europe

– REVEALED: Inside the 76-page guide handed to migrants to evade borders through EU:

A COMPREHENSIVE handy guide is being dispersed among migrants giving them tips on how to evade borders to travel through the promised land of Europe.

The gleaming 76-page manual lists train routes, bus routes and complete maps of road networks for asylum seekers to make their whole way across the continent without stopping.It has been described as a “complete invasion plan” for Europe by frustrated lorry drivers who face daily break-ins to their freight as they travel across the continent.In a chilling warning, worried British politicians raised concerns the guide will feed into the hands of evil people smugglers, linked to the barbaric Islamic State (ISIS), who look to make millions from the escalating migrant crisis.The Dublin Regulation requires migrants to apply for asylum in the first country they land in.

However many migrants travel by bus, train and on foot to avoid staying in the first country they reach.

The guide, named ‘Welcome to Italy and Europe!’, worryingly hands out tips on how migrants can register and travel to anywhere in the EU regardless of where they first entered.

A list of drop off points, rest stops and food stations come complimentary within the guide.

It says: “If 12 months after your arrival in Italy you have not yet applied for asylum, you do not have to apply in Italy because Italy is not responsible for your asylum application.

“If you arrived in Italy, did not apply for asylum and there is evidence that you stayed for at least five consecutive months in another country of the EU before applying for international protection, this country has to examine your protection.”

It also advises migrants to take advantage of relatives who have already been granted international protection.

The guide adds: “You can apply for asylum in this country asking for family reunification.”

It says: “Do not respond to provocations by police!”

There are also scathing comments warning migrants that they will be asked “trick questions” and not to trust border agency Frontex because they are “not there to help you”.

It goes on: “The Italian police and members of the European agencies (such as Frontex and Europol) might ask you some trick question to qualify you as an ‘economic migrant’ rather than an ‘asylum seeker’.

“If they ask you for example: ‘why did you come to Italy?’ and you answer ‘to work’ they prevent you from apply for political asylum.”

It adds: “Frontex is the European Agency in charge of border control, it is not working to help you and it is not an NGO but a police agency.”

The leaflet also includes a dictionary of well known phrases, that may come in handy for migrants travelling across the continent.

An English truck driver, who works in and out of Calais, described it as a “complete invasion of Europe”.

He told Express.co.uk: “There are detailed maps showing drop off points, food stations and rest stops from No Borders.

“The map shows a route through southern Italy through the north and over the Alps. They are going to implement this any time now.

“It shows from the coast line of Italy all the way up to the Alps, which routes to go on, which trains to use, and includes the bus and road network too.

“From the inference and the way it is written it will be passed from one person to another.

“This is a complete invasion plan for the whole of Europe.”

The leaflets are currently circulating on social media, as provided by vigilante groups ‘Welcome to Europe’ and ‘No Borders’.

They are available in English, French, Arabic, Italian and Farsi.

1 thought on “REVEALED: Inside The 76-page “Complete Invasion Plan For The Whole Of Europe” Handed To Migrants To Evade Borders Through EU”