– With A Double Digit Lead In Indiana Polls, Trump Calls The Race: “It’s Over, Cruz Can Not Win”:

Ahead of the Indiana primary on Tuesday, Donald Trump holds a 15 point lead in the polls according to the Wall Street Journal, and it is starting to become inevitable (at least for those not named Cruz and Kasich) that The Donald will be the Republican’s choice to run against Hillary in the fall. 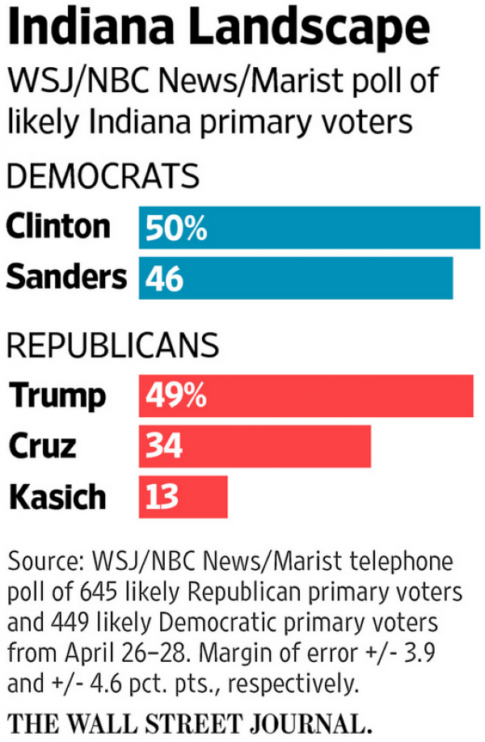 “After the Acela primary, there is an aura of inevitability surrounding the Trump and Clinton candidacies,” said Lee M. Miringoff, director of the Marist College Institute for Public Opinion.

The double digit lead in Indiana is significant, as it emphasizes just how badly the bizzare Cruz/Kasich alliance has imploded since its inception. The journal reports that 58% of likely Republican primary voters disapproved of the Cruz/Kasich deal, seeing it as “further proof that the Republicans are trying to rig the game against Trump.” As evidence of just how much Cruz and Kasich overestimated the hastily put together deal, 63% of the GOP primary voters indicated that it wasn’t a factor in deciding their votes, and that not all of Kasich’s supporters would vote for Cruz if Kasich wasn’t there.

Looking further down the road, and perhaps setting the stage for the pressure delegates will feel by their constituencies, nearly two-thirds of the Republican voters said that if no candidate wins a majority of delegates during primary season and a contested convention takes place, then the candidate with the most votes in the primaries should get the nomination.

Trump of course, believes that he’s already going to be the nominee outright. In an interview with Fox News Sunday, he said if he wins in Indiana on Tuesday that the race would be over:

The interview is also worth the watch as Trump discusses a few other topics such as the Middle East, and how much time and money has been wasted there by the United States’ insistence in being in the middle of everything.

It will be interesting to see how quickly the establishment’s sentiment shifts if Trump in fact does win Indiana by a landslide on Tuesday. After months of increasingly desperate moves to try and stop him, the question will be will how quickly does the establishment pivot to all out support of Trump.