According to CNN, yet another close encounter took place between the U.S. and Russia yesterday, as a Russian SU-27 allegedly conducted a barrel roll over top of a U.S. Air Force RC-135 reconnaissance plane flying over the Baltic sea. The incident was in international airspace according to the Defense Department. 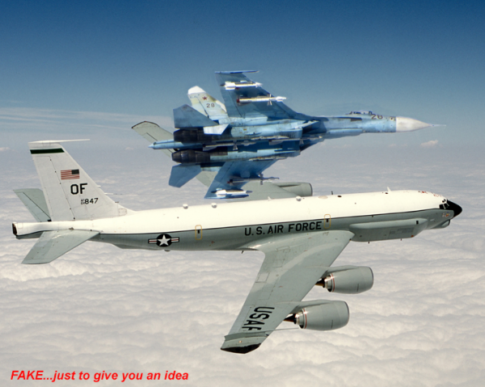 The Russian SU-27 approached alongside within 25 feet of the U.S. aircraft, and then flew inverted over the top of the plane to the other side, according to Lt. Col. Michelle L. Baldanza, a U.S. Army spokesperson.

“The SU-27 intercepted the U.S. aircraft flying a routine route at high rate of speed from the side then proceeded to perform an aggressive maneuver that posed a threat to the safety of the U.S. aircrew in the RC-135,” Baldanza said.

There appears to be more to the story however, as Russia’s defense ministry claims that the U.S. plane had turned off its transponder, which is needed for identification..

“The US Air Force has two solutions: either not to fly near our borders or to turn the transponder on for identification.”