– Halliburton Fires One Third Of Global Staff: “What We Are Experiencing Today Is Unsustainable”:

In a brutally frank and painfully honest first quarter operational update, Halliburton president Jeff Miller poured freezing cold water all over the “oil is stabilizing, and everything is going to be awesome” narrative. After explaining that the firm has laid off one-third of its global employees, and pointing to the collapse in sequential revenues across every business unit, Miller exclaimed: “What we are experiencing today is far beyond headwinds; it is
unsustainable.”

Due to the deadline of its merger agreement with Baker Hughes Halliburtion has delayed its earnings conference call until May 3rd and so gave an operational update. The healdlines were horrific:

“Life has changed in the energy industry, especially in North America, and over the past several quarters we have taken the steps to adapt to that fact.

Operators globally are under immense pressure, and many of our North America customers are fighting to maintain some value for their shareholders. Our goal is to work with those customers to get through these tough times.

Our customers have taken defensive actions to solidify their finances including significant reductions to headcount and capital spend. While these were necessary actions, it clearly will result in production declines in the back half of 2016. But even when operators feel better about the markets, they will still face issues of balance sheet repair and we believe they will be cautious in adding rigs back.”

And then President Jeff Miller unloaded…

“In North America, the industry experienced another tough quarter with the average U.S. rig count down 27% sequentially. By comparison, our revenue was down 17%, outperforming our peer group, and our completions activity was only down single digits sequentially, demonstrating our clients’ continued flight to quality.

What we are experiencing today is far beyond headwinds; it is unsustainable. My definition of an unsustainable market is one where all service companies are losing money in North America, which is where we are now.

However, our margins have continued to show resilience despite the aggressive activity and pricing declines we have seen since the peak, with decremental margins of only 22% for the quarter.”

But apart from that, he stuck to the narrative that is now becoming standard – that H2 will see some ‘stability’…

From the peak in the fourth quarter of 2014, the U.S. rig count has declined almost 80%, setting a new record low. By comparison, our North America revenue is down 62% over the same period, again outperforming our peers, and operating income has only now slipped to a quarterly loss position. The second quarter average land rig count is already down more than 20% sequentially, and setting new record lows every week. Nevertheless, we believe we will see the landing point for the U.S. rig count during the second quarter. 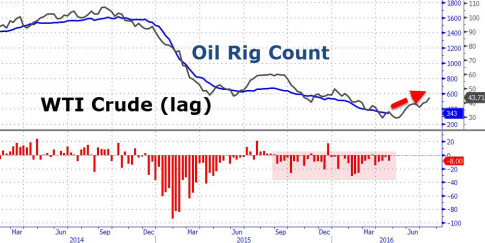 Once we see stability in the rig count, our cost cutting measures will start to catch up. Previous downturns indicate that there is typically at least a one quarter lag after the rig count flattens before we see our margins begin to improve.