“With China’s debt/GDP already estimate at 350%, how much longer can China sustain this stunning debt (and by definition, deposit) growth continue?” 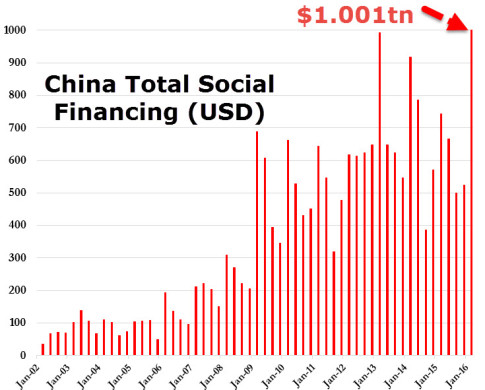 When China reported its economic data dump last night which was modestly better than expected (one has to marvel at China’s phenomenal ability to calculate its GDP just two weeks after the quarter ended – not even the Bureau of Economic Analysis is that fast), the investing community could finally exhale: after all, the biggest source of “global” instability for the Fed appears to have been neutralized.

But what was the reason for this seeming halt to China’s incipient hard landing? The answer was in the secondary data that was reported alongside the primary economic numbers: the March new loan and Total Social Financing report.

As the PBOC reported last night, Chinese banks made 1.37 trillion yuan ($211.23 billion) in new local-currency loans in March, well above analyst expectations, as the central bank scrambled to keep the economy engorged with new loans “to keep policy accomodative to underpin the slowing economy” as Reuters put it. This was up from February’s 726.6 billion yuan but off a record of 2.51 trillion yuan extended in January. Outstanding yuan loans grew 14.7 percent by month-end on an annual basis, versus expectations of 14.5 percent.

But it wasn’t the total loan tally that is the key figure tracking China’s credit largesse: for that one has to look at the total social financing, which in just the month of March rose to 2.34 trillion yuan, the equivalent of more than a third of a trillion in dollars!

And there is your answer, because if one adds up the Total Social Financing injected in the first quarter, one gets a stunning $1 trillion dollars in new credit, or $1,001,000,000,000 to be precise, shoved down China’s economic throat. As shown on the chart below, this was an all time high in dollar terms, and puts to rest any naive suggestion that China may be pursuing “debt reform.” Quite the contrary, China has once again resorted to the old “growth” model where GDP is to be saved at any cost, even if it means flooding the economy with record amount of debt.

And to put it all together, the PBOC also reported that the broad M2 money supply measure grew 13.4% in March from a year earlier, or precisely double the rate of growth of GDP. This means that it took two dollars in new loans to create one dollar of GDP growth. 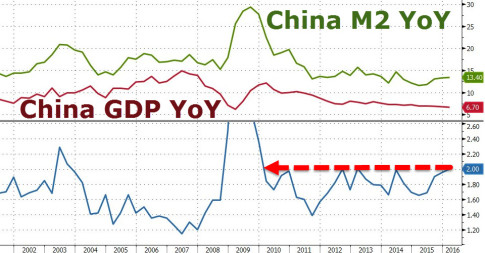 With China’s debt/GDP already estimate at 350%, how much longer can China sustain this stunning debt (and by definition, deposit) growth continue?