“Now things are worse than ever,” says Yuli Sánchez. “They kill people and no one is punished while families have to keep their pain to themselves.“… “This is now wilder than the wild west.“…  “Venezuela is pure chaos now. It seems to me there is no way back,” the former policeman says.

– “It’s Pure Chaos Now; There Is No Way Back” – Venezuela Hits Rock Bottom As Its Morgues Overflow:

When we previewed Venezuela’s upcoming hyperinflation, which in January was predicted to be 720% and as of this moment is likely far higher… 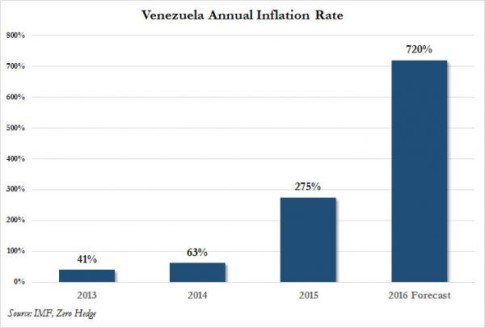 … we said “This Is What The Death Of A Nation Looks Like” and said “there is no good news in any of the above for the long-suffering citizens of this “socialist paradise” which any minute now will be downgraded to its fair value of “socialist hell.“

Subsequent news that Venezuela was now openly liquidating its gold reserves while its president, in an amusing twist, announced last week, that henceforth every Friday will be a holiday, (the term there was a slightly different meaning) to cut down on electricity usage (while blaming El Nino for its electricity rationing) merely confirmed that the end if nigh for this once flourishing Latin American nation.

Sadly, while we have been warning for years about Venezuela’s inevitable, economic devastation, we said it was only a matter of time before the chaos spreads to broader society and leads to total collapse.

That may have arrived because as even the FT now admits, after visiting the main Caracas morgue, Venezuela risks a descent into chaos.

But back to the morgue of central Caracas, where FT correspondent Andres Schipani writes that the stench forces everyone to cover their nostrils. “Now things are worse than ever,” says Yuli Sánchez. “They kill people and no one is punished while families have to keep their pain to themselves.”

Ms Sánchez’s 14-year-old nephew, Oliver, was shot five times by malandros, or thugs, while riding on the back of a friend’s motorcycle. His uncle, Luis Mejía, remarked that in a fortnight three members of their family had been shot, including two youths who were shot by police.

Sounds a little like Chicago on a Friday… only in Venezuela things are even worse: “an economic, social and political crisis facing Nicolás Maduro, Venezuela’s unpopular president, is being aggravated by a rise in violence which is prompting fears that this oil-rich country risks becoming a failed state.”

Even the morgue employees are asking if they should give up.

“What can we do?” Mr Mejía asks. “Give up.” The morgue employee in charge of handling the corpses notes that a decade ago he received seven or eight bodies every weekend. These days, he says, that number has risen to between 40 and 50: “This is now wilder than the wild west.”

Critics say that the Venezuelan government is increasingly unable to provide citizens with water, electricity, health or a functioning economy which can supply basic food staples or indispensable medicines, let alone personal safety.

In other words, total socioeconomic collapse. This is what it looks like:

Last month alone, Venezuelans learned of the summary execution of at least 17 gold miners supposedly by a mining Mafia, the killing of two police officers allegedly by a group of students who drove a bus into a barricade, and a hostage drama inside a prison at the hands of a grenade-wielding criminal gang. On Wednesday, three policemen were killed when an armed gang busted a member out of a lock-up in the capital.

At least 10 were killed in a Caracas shanty town after a confrontation between local thugs armed with assault rifles, while a local mayor was gunned down outside his home in Trujillo state last month. There are widespread reports of lynchings.

All this is creating a broad unease that Mr Maduro is unable to maintain order… There is a lack of basic goods. Analysts warn that the economic crisis risks turning in to a humanitarian one.

Some refuse to acknowledge that a state erected on so much oil wealth can be a failed state:

“Failed state is a nebulous concept often used too lightly. That’s not the case with today’s Venezuela,” says Moisés Naím a Venezuelan distinguished fellow at the Carnegie Endowment for International Peace. “The evidence of state failure is very concrete in the country that sits on top of the world’s largest oil reserves.”

Alas, a failed state is precisely what Venezuela has become: Venezuela is already one of the world’s deadliest countries. The Venezuelan Observatory of Violence, a local think-tank, says the murder rate rose last year to 92 killings per 100,000 residents. The attorney-general cites a lower figure of 58 homicides per 100,000. This is up from 19 per 100,000 in 1998, before Maduro’s predecessor Hugo Chavez took power.

It gets worse, because in addition to a soaring murder rate, the government itself is implicated.

“Venezuelans are facing one of the highest murder rates in the hemisphere and urgently need effective protection from violent crime,” said José Miguel Vivanco HRW’s Americas director. “But in multiple raids throughout the country, the security forces themselves have allegedly committed serious abuses.”

Their findings show that police and military raids in low-income and immigrant communities in Venezuela have led to widespread allegations of abuse, including extrajudicial killings, mass arbitrary detentions, maltreatment of detainees, forced evictions, the destruction of homes, and arbitrary deportations.

And like all other failed governments, Maduro’s administration is quick to deflect blame, instead accusing violence within its borders on Colombian rightwing paramilitaries “engaged in a war against its revolution.” But as David Smilde and Hugo Pérez Hernáiz of the Washington Office on Latin America, a think-tank, recently wrote: “Attributing violence in Venezuela to paramilitary activity has been a common rhetorical move used by the government over the past year, effectively making a citizen security problem into a national security problem.”

For many Venezuelans it no longer matters who is to blame. “It is a state policy of letting anarchy sink in,” says a former policeman outside the gates of a compound in Caracas.

The FT adds that the former police station now houses the Frente 5 de Marzo, one of the political groups that consider themselves the keepers of socialism’s sacred flame. The gates bear the colours of the Venezuelan flag and are marked with bullet holes. The man believes there is something akin to a civil war going on.

“Venezuela is pure chaos now. It seems to me there is no way back,” the former policeman says.  He is right.

And since words can not fully do a failed state justice, here is a video clip from Jeff Berwick showing the reality on the ground in the country where “socialism’s sacred flame” is about to go out for good.

4 thoughts on ““It’s Pure Chaos Now; There Is No Way Back” – Venezuela Hits Rock Bottom As Its Morgues Overflow”