– Russia Relies On Gold To Push Reserves Back Over $380 Billion:

Whether you define gold as a barbarous relic, a pet rock, “tradition“, or “doomed“, Russia surely refers to it as a saving grace. As Russia’s foreign reserves dwindled to just under $350 billion in early 2015, many predicted Russia was going to burn through all of their reserves in the not too distant future as they dealt with a depreciating Ruble and plummeting oil revenues.

However, this dire prediction did not pan out mainly due to one thing: Russia’s strategic decision to load up on as much gold over the past few years as it possibly could.

As we have shown in the past, Russia has shown an insatiable desire for Gold, and as Bloomberg points out, has increased their holdings more than 12% since last July. 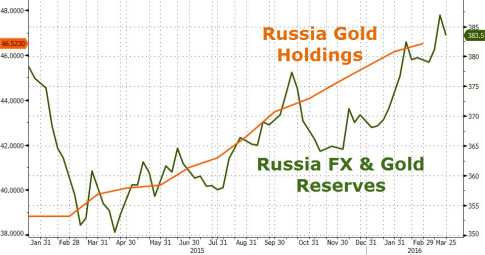 This has paid dividends (figuratively in Russia’s case, literally for those who participate in India’s gold monetization scheme) as Gold’s price has helped push Russia’s foreign reserves back over $380 billion for the first time since January 2015. 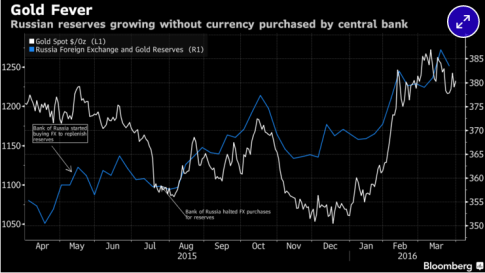 Perhaps most critically, what their gold purchases have afforded the Central Bank of Russia is the luxury of not having to purchase fx in the market. Purchasing foreign currencies to increase reserves would put further downward pressure on an already depressed Ruble. Russia is walking a fine line between stimulating their economy, and containing inflation (something further fx purchases would surely exacerbate), and they are content to not have to press that any further at the moment.