For those wondering why Trump rallies tend to devolve to pugilistic matches, where even belligerent 15-year-old protesting (or perhaps “provocative” is a better word) girls end up getting pepper sprayed much to the media’s fascination, the answer is Craig’s List ads such as the one below, in which allegedly “I’m feelin’ the Bern“-affiliated organizers provide paid positions for protesters at Trump rallies, and which provide not only shuttle buses, parking, and signs (as well as time cards) but also hand out $15/hour (as a “part-time employment”) for said protest activity “due to the economic inequality.” 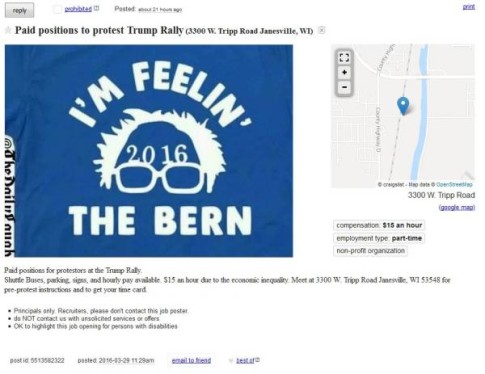 Well that’s one way to cover the “minimum wage.”

This particular ad has since been removed by its author, although as the Daily Caller recently pointed out, this is a recurring pattern as anti-Trump protesters openly admit answering Craigslist ads and getting paid to protest at Trump rallies. This is what the DC said previously:

The Establishment on both the left and the right, who want to disenfranchise the millions of Republican voters who support Donald Trump, have blamed the staged riots near Trump rallies on Trump or on Bernie Sanders. That’s like blaming the Russians for the Reichstag Fire. Bernie has little to do with these manufactured protests. This is a Clinton operation, a faux protest.

False flag operations have long been common in politics, but these riots are poisonous to the electorate, intentionally designed to turn violent and stifle free speech.

This free speech-busting goon squad operation is directed by supporters of Hillary Clinton. It is paid for mostly by George Soros and MoveOn.org and pushed by David Brock at Media Matters for America. It’s also funded by reclusive billionaire Jonathan Lewis, who was identified by the Miami New Times as a “mystery man.” He inherited roughly a billion dollars from his father Peter Lewis (founder of Progressive Insurance Company).

A march and demonstration against Trump at Trump Tower essentially fizzled Saturday when only 500 “protesters” of the promised 5000 showed up. Infiltrating the crowd, I learned most were from MoveOn or the Occupy movement. Soap was definitely in short supply in this crowd. Several admitted answering a Craig’s list ad paying $16.00 an hour for protesters.

Hillary understands that Trump would lose the votes of certain establishment Republicans if he were the nominee. On the other hand, it doesn’t matter, because of his crossover outreach. In Michigan, Democrats and independents who have lost their jobs because of disastrous globalist trade deals like NAFTA are lining up to vote for Donald.