Latest: According to Al Arabiya and now multiple other sources, ISIS has claimed responsibility for the attack via affiliated propaganda channels.

From the group’s statement:

“Islamic State fighters opened fire inside Zaventem Airport, before several of them detonated their explosive belts, as a martyrdom bomber detonated his explosive belt in the Maalbeek metro station. The attacks resulted in more than 230 dead and wounded.”

Update: The latest reports indicate 38 dead, over 212 injured, 3 explosions: 1 bomb at the metro and 2 suicide bombers at the Brussels Airport; the country remains on high alert.

Update: Police found a Kalashnikov next to one of the dead attackers at the Brussels airport.

Update: Belgian media have reported a fourth explosion apparently at Rue De La Loi. It may be a controlled detonation. Police are also evacuating Royal Park.

Update: The Belgian army will deploy 275 more troops to Brussels as the city will once again come to resemble a war zone.

Update: Reports indicate the death toll from the twin airport blasts sits at 13 while casualties in the metro number 20. Cell phone networks are congested and authorities are encouraging Belgians to use messaging apps and social media to contact friends and family.

Obviously, officials believe there could be a connection to networks cultivated by Paris suspect Salah Abdeslam who was captured in a Molenbeek anti-terror raid last week. On theory says that cells connected to Abdeslam might have pulled forward plans to bomb soft targets fearing more raids were imminent.

*  *  *Just four months after the tragic attacks in Paris, Europe was once again the epicenter of a terrorist mass murder, when several deadly explosions this morning rocked Brussels, first hitting the international airport and then a metro station near the European Union institutions, resulting in dozens of casualties and over a hundred wounded in what Belgian authorities moments ago labeled as terrorist attacks. 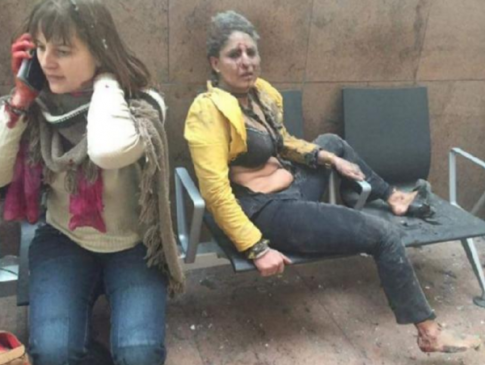 The first explosions Tuesday morning hit the city’s main airport outside a security check. According to Reuters, at least 10 people have reportedly been killed although estimates in social media range as high as 17, and dozens were wounded after two blasts ripped through Zaventem airport. Brussels police said that Zaventem’s great hall was targeted in the blast, but they couldn’t confirm the number of the victims in the attack. “There was an explosion, but we cannot say more,” a police spokesperson said.

“It was atrocious. The ceilings collapsed,” Zach Mouzoun, who arrived on a flight from Geneva about 10 minutes before the first blast, told BFM television. “There was blood everywhere, injured people, bags everywhere.”

“It was a war scene,” he added, for emphasis.

Smoke of #Brussels airport terminal after what sounded like two explosions just before 8 AM pic.twitter.com/d7e8mGBp1M

After reports of an explosion at Brussels airport flights are holding with no arrivals https://t.co/Jy9O4CuqNJpic.twitter.com/KzGmapjTTy

A suicide bomber was responsible for one of the blasts, Belgian broadcaster VRT said. Three suicide belts packed with explosives have been found at the Brussels airport by police, local TV reported.

Reports also suggest that first there was a shot fired in the departure hall, then something was called out in Arabic, and only afterward, two explosions rocked the facility.

A person briefed on the incident said two devices exploded inside the airport outside the security check and that more than 100 people had been injured. Smoke could be seen rising from the airport in the aftermath of the explosions.

According to preliminary reports, one of the explosions took place near the American Airlines check-in desk. A government source confirmed to VRT broadcaster that it was an attack, while Anke Fransen, spokeswoman for Brussels Airport, said there were multiple injuries. “We can confirm that there have been two explosions in the departure hall. We called the emergency services on the ground – they [are] now provid[ing] first aid to the injured.“ 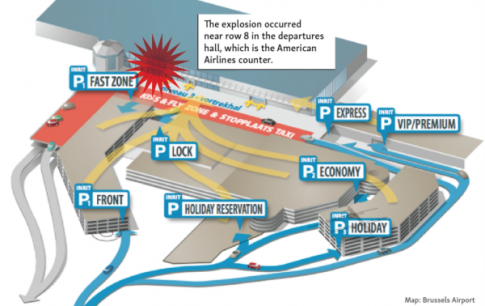 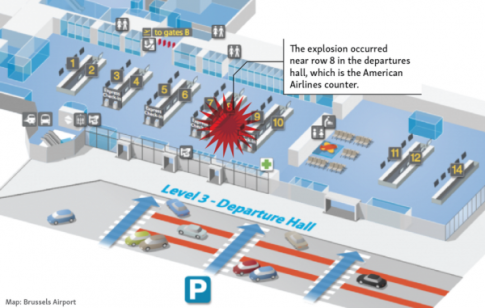 Niels Caignau, flight watcher at Swissport, told Radio 1 that he heard an explosion at around 8:00 a.m. local time.  “The windows outside the departure hall are completely shattered. Many people have run out with tears in [their] eyes. We were advised to stay indoors.”

No planes are landing at Brussels Airport which is in lockdown, and planes are being diverted to Antwerp. Planes are circling over the city of Liege. Sky News Middle East correspondent Alex Rossi, who was at the airport en route to Tel Aviv, has tweeted that he could “feel the buildings move.”

Belgian officials immediately raised the terror alert across the country. As the WSJ adds, police have closed the access road leading to the airport and police and ambulances were rushing to the scene. The airport began evacuating the building where the explosions took place and an official warned people not to come to the area. “Don’t come to the airport—airport is being evacuated. Avoid the airport area. Flights have been cancelled,” the airport said. 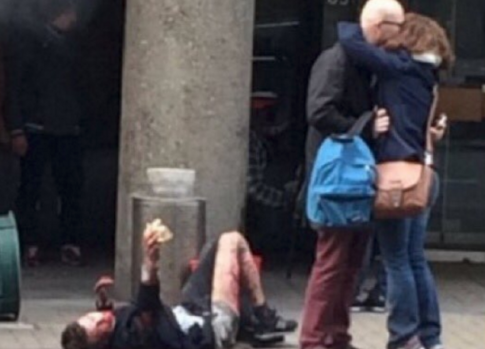 The third explosion struck just after 9 a.m. local time struck Maelbeek metro station, very near the heart of the European quarter in Brussels, home to the EU institutions.

According to preliminary local police reports cited by RT, at least 10 people were killed. The explosion took place less than an hour after a deadly airport bombing, which killed at least 17 people.  Large amounts of smoke have been seen coming out of the metro station in the Belgian capital. Brussels’ transport authority says all metro stations in the city have been closed, Reuters reports.

Minutes after the blast at Maalbeek, a second explosion is reported to have taken place at the near-by Schuman metro station. Images on social media have shown passengers being evacuated from inside the metro and walking along the train tracks. The Maalbeek station is also near a number of important EU buildings such as Berlaymont building, which houses the EU Commission and the Council of the European Union.

Staff working at the EU commission have also been told to stay indoors.   Belgian authorities have raised the security alert to the highest level following blasts at the Zaventem Airport and Maalbeek Metro station. 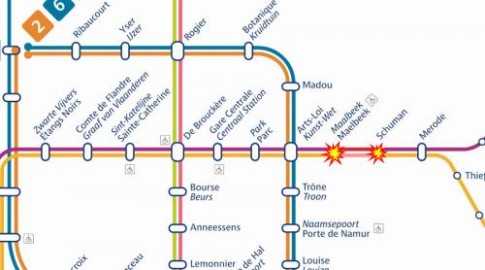 Images have emerged of the explosion at #Maalbeek metro station in #Brusselspic.twitter.com/VpfuULhiMH 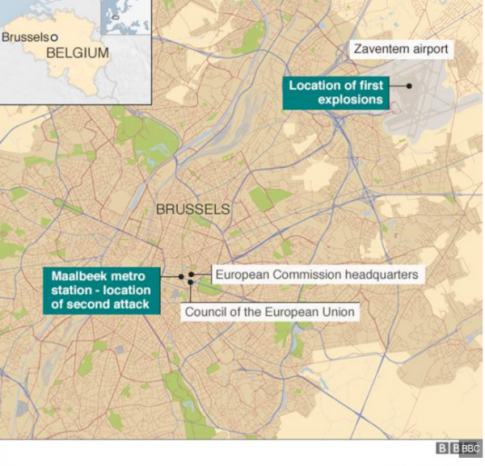 All trains to and from Brussels have been suspended and the airport will remain closed until at least Wednesday.

A video summary of this morning’s events:

And a live feed of events in Belgium and across Europe which wakes up to another bloody terrorist morning, courtesy of SkyNews: