The “it’s for your own protection” chickens are coming home to roost. The tyrannical powers granted to government in order to stop foreign terrorists are rapidly being turned inward against an ever servile and apathetic American public. The “war on terror” is slowly but surely transitioning into a “war on the citizenry.” A war that will only intensify as the public mood toward the status quo deteriorates further. 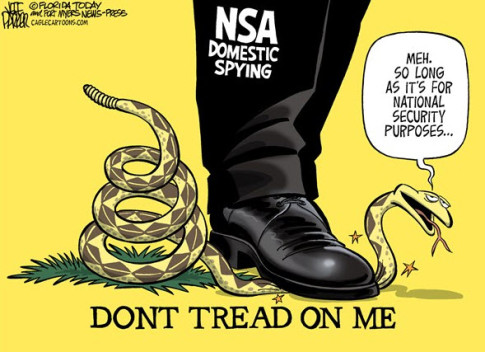 – War on Terror Turns Inward – NSA Surveillance Will Be Used Against American Citizens:

In time of actual war, great discretionary powers are constantly given to the Executive Magistrate. Constant apprehension of War, has the same tendency to render the head too large for the body. A standing military force, with an overgrown Executive will not long be safe companions to liberty. The means of defence against foreign danger, have been always the instruments of tyranny at home. Among the Romans it was a standing maxim to excite a war, whenever a revolt was apprehended. Throughout all Europe, the armies kept up under the pretext of defending, have enslaved the people.

Our founding fathers studied power structures over the millennia and knew exactly what they were doing when solidifying the Bill of Rights into the U.S. Constitution. All it took was a couple hundred years, an extraordinarily ignorant and apathetic American public, and a major terror attack to roll back this multi-generational gift.

For many years, I and countless others have been screaming from the rooftops that a society should never trade civil liberties for security. Life on earth has always been dangerous for us humans, and what has historically separated free and noble civilizations from stunted tyrannies is a willingness to acknowledge such a precarious existence while at the same time demanding and defending one’s dignity and liberty. In the aftermath of the attacks of 9/11 (seemingly carried out by U.S. ally Saudi Arabia), the American public has demonstrated no such strength of character or historical maturity, thus allowing a corrupt, deceptive and lawless government to run roughshod over freedom with very little resistance.

Well now the chickens are coming home to roost. The tyrannical powers granted to government in order to stop foreign terrorists are rapidly being turned inward against an ever servile and apathetic American public.

A while back, we noted a report showing that the “sneak-and-peek” provision of the Patriot Act that was alleged to be used only in national security and terrorism investigations has overwhelmingly been used in narcotics cases. Now the New York Times reports that National Security Agency data will be shared with other intelligence agencies like the FBI without first applying any screens for privacy. The ACLU of Massachusetts blog Privacy SOS explains why this is important:

What does this rule change mean for you? In short, domestic law enforcement officials now have access to huge troves of American communications, obtained without warrants, that they can use to put people in cages. FBI agents don’t need to have any “national security” related reason to plug your name, email address, phone number, or other “selector” into the NSA’s gargantuan data trove. They can simply poke around in your private information in the course of totally routine investigations. And if they find something that suggests, say, involvement in illegal drug activity, they can send that information to local or state police. That means information the NSA collects for purposes of so-called “national security” will be used by police to lock up ordinary Americans for routine crimes. And we don’t have to guess who’s going to suffer this unconstitutional indignity the most brutally. It’ll be Black, Brown, poor, immigrant, Muslim, and dissident Americans: the same people who are always targeted by law enforcement for extra “special” attention.

This basically formalizes what was already happening under the radar. We’ve known for a couple of years now that the Drug Enforcement Administration and the IRS were getting information from the NSA. Because that information was obtained without a warrant, the agencies were instructed to engage in “parallel construction” when explaining to courts and defense attorneys how the information had been obtained. If you think parallel construction just sounds like a bureaucratically sterilized way of saying big stinking lie, well, you wouldn’t be alone. And it certainly isn’t the only time that that national security apparatus has let law enforcement agencies benefit from policies that are supposed to be reserved for terrorism investigations in order to get around the Fourth Amendment, then instructed those law enforcement agencies to misdirect, fudge and outright lie about how they obtained incriminating information — see the Stingray debacle. This isn’t just a few rogue agents. The lying has been a matter of policy. We’re now learning that the feds had these agreements with police agencies all over the country, affecting thousands of cases.

This parallel construction concept is extraordinarily important, and most people are completely unaware of its meaning and usage. To get up to speed, see last year’s post:

How the DEA Uses “Parallel Construction” to Hide Unconstitutional Investigations

Of course, this is just one example of how the “war on terror” is slowly but surely transitioning into a “war on the citizenry.” A war that will only intensify as the public mood toward the status quo deteriorates further.

For example, we recently learned a little bit about how military drones are being used on U.S. soil for domestic non-terrorism related purposes. USA Today reports:

The Pentagon has deployed drones to spy over U.S. territory for non-military missions over the past decade, but the flights have been rare and lawful, according to a new report.

The Pentagon has publicly posted at least a partial list of the drone missions that have flown in non-military airspace over the United States and explains the use of the aircraft. The site lists nine missions flown between 2011 and 2016, largely to assist with search and rescue, floods, fires or National Guard exercises.

But the policy said that any use of military drones for civil authorities had to be approved by the Secretary of Defense or someone delegated by the secretary. The report found that defense secretaries have never delegated that responsibility.

While use thus far apparently has been measured, this is always how it starts. The following paragraphs should make it clear where it’s headed.

The report quoted a military law review article that said “the appetite to use them (spy drones) in the domestic environment to collect airborne imagery continues to grow, as does Congressional and media interest in their deployment.”

Military units that operate drones told the inspector general they would like more opportunities to fly them on domestic missions if for no other reason than to give pilots more experience to improve their skills, the report said. “Multiple units told us that as forces using the UAS capabilities continue to draw down overseas, opportunities for UAS realistic training and use have decreased,” the report said.

Unless there’s significant pushback to the use of military drones domestically, the practice is likely to expand and expand and expand until you can’t go out for a coffee without a camera dangling above your head.

The Pentagon Admits: The “War on Terror” Will Never End (how convenient)

The BBC is Using Anti-Terror Surveillance to Find Tax Dodgers

2 thoughts on “War on Terror Turns Inward: NSA Surveillance Will Be Used Against American Citizens”