“The website, cdec.water.ca.gov, maintains daily, monthly, and annual reservoir records going back at least to 1985,” says H.B. “It is extremely interesting what the data reveals if you’re willing to search for it. 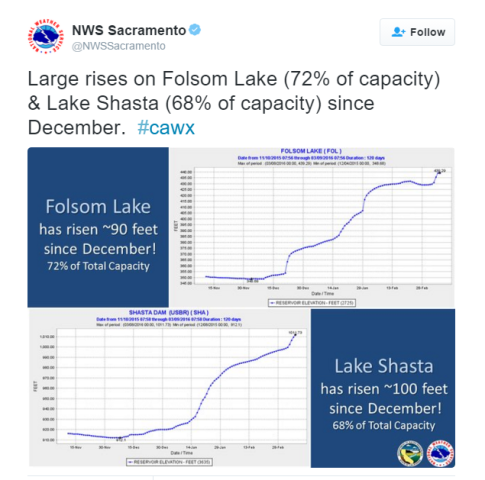 “For example, the last El Niño in 2010-11 replenished virtually all the major reservoirs managed by the state water board after the droughts began in 2007. Yet at Trinity Lake in northwestern California, from 1986-93 there was an equally impressive drought and decline in lake levels as seen today, and in 1977 there was a catastrophic decline to its lowest level in the past 30 years — which matches with the lowest seasonal snowfall on record at Mammoth Mountain Ski Resort (94.0″, or 26.9% of average).

“What does this tell us?

(1) That drought is normal in California, especially southern California

(2) That this current drought is not unprecedented on even a climatologically abbreviated duration of ~30 years.

(3) That natural processes are responsible for quick and dramatic recoveries.

“We as humans tend to think in extremely short time frames, and function reactively rather than proactively. If California receives normal rainfall patterns this year and next winter, it is highly unlikely that there will be any mention of the drought of the past five years nor legislative planning for the next future drought sure to hit. It’s comical in how Californians regard its salience.”