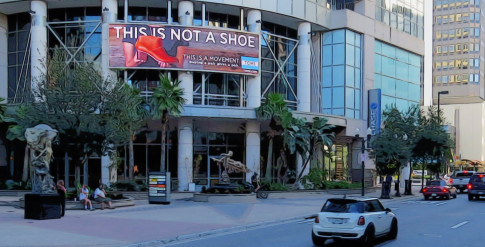 – New Billboards Film You, Then Use Your Mobile Phone To Follow You:

Recently, Anti-Media covered the revelation that Samsung transmits audio commands recorded by their Smart TVs to a third party company, which raises all sorts of red flags regarding encryption standards and, more importantly, people’s privacy in their own homes.

Last year, Anti-Media posted a list of surprising objects endowed with surveillance or data extraction capabilities — including the Statue of Liberty, mannequins, billboards, and more. The company Immersive Labs, for instance, creates software for digital billboards that allows them to watch your face and then tailor a specific ad based on your facial features.

On Monday, the next generation of corporate surveillance was deployed — a new kind of billboard that utilizes surveillance triangulation the likes of which we’ve never seen.

According to the article entitled “See That Billboard? It May See You,” Clear Channel Outdoor Americas has partnered with a bevy of tech and data companies, including AT&T, to combine billboard surveillance and location-based mobile data in order to study people’s travel patterns and shopping behaviors. The program, called Radar, will hit 11 major markets this coming Monday. Clear Channel plans on expanding Radar to the entire nation within a year.

Billboards equipped with cameras that track consumers is not new, but tracking drivers by aggregating data from both billboards and mobile phones simultaneously is an evolution in data mining.

Information gleaned from these new billboards will include the average age and gender of people who pass by, as well as the time and what stores they subsequently visit. The info collected from the billboards will then be paired with data from the third party companies for a one-two punch that will be very valuable to advertisers.

In essence, there is a tag-team effect: the billboards identify you, then the third party companies use your mobile phone to follow and track your consumer behavior.

For instance, PlaceIQ will use mobile apps to determine location data and consumer behavior. In an article for Adweek entitled “The Future of Auto Marketing Could Be a Little Creepy – Get ready for brands to follow you everywhere,” PlaceIQ CEO and co-founder Duncan McCall discussed another campaign “designed to target in-market car buyers, one that tracks people from the moment they begin contemplating making a purchase to the moment they leave their house and head to the dealer.”