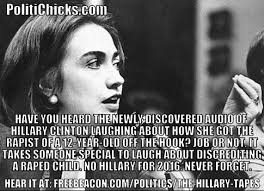 Defense attorneys by definition are hired by their client to bring the best possible outcome for their charged crime. Some attorneys have to defend the worst of the worst in society; apparently one of those was Hillary Clinton.

In interview tapes from 1975, Hillary Rodham became the court-appointed defense attorney for 41-year old Thomas Alfred Taylor, who was accused of raping a 12-year old girl.

Taylor reportedly lured his victim to his car, then he and two other male companions took her to an isolated area where the child was raped. Taylor was facing a 30-year prison sentence before Clinton gave a plea deal to the prosecution.

In the court proceedings, Clinton was quoted as stating that the victim was “emotionally unstable” and had a “tendency to seek out older men and engage in fantasizing.” Clinton went on to say, “I have also been told by an expert in child psychology that children in early adolescence tend to exaggerate or romanticize sexual experiences and that adolescents in disorganized families, such as the complainant’s, are even more prone to exaggerate behavior.”

Clinton claims to be a champion of women and children’s rights, famously stating that it “takes a village to raise a child”. Perhaps the maternal instincts of a young and ambitious young Hillary Rodham had not quite matured in 1975; and after Benghazi, perhaps she still has a way to go.