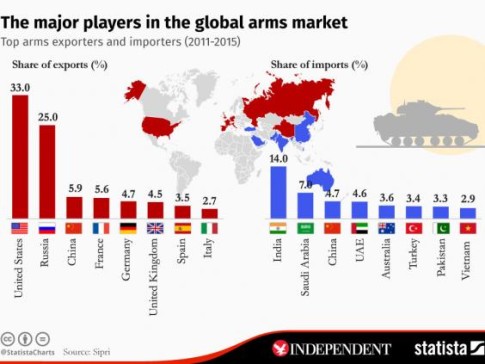 – Arms trade: One chart that shows the biggest weapons exporters of the last five years:

The number of major weapons switching hands around the world was up 14 per cent in the last five years, compared to the five years before that.

The Stockholm International Peace Research Institute, an independent resource on global security, has released a study that shows that India is the world’s largest importer of arms.

The chart shows that Asia was the main importer of weapons in the last five years, as the region races to arm itself ahead of its regional rivals: China and Pakistan. The high levels of Indian imports are also the result of its small domestic arms industry, which means it has to buy weapons from overseas.

SIPRI also identified eight rebel forces as importers of major weapons in 2011–15, but none of these forces accounted for more than 0.02 per cent of total deliveries.

The US was by far the top arms exporter in 2011-15, with a 33 per cent share of the global market. Exports from the US have increased 27 per cent in the last five years.

Saudi Arabia is its biggest customer, and aircraft are its biggest product. As of the end of 2015, the USA had numerous outstanding large arms export contracts, including contracts to supply a total of 611 of its new generation F-35 combat aircraft to nine states.

The UK is the sixth largest exporter of arms in the world, with a 4.5 per cent share of the global market. Arms exports from the UK increased 26 per cent in the last five years.