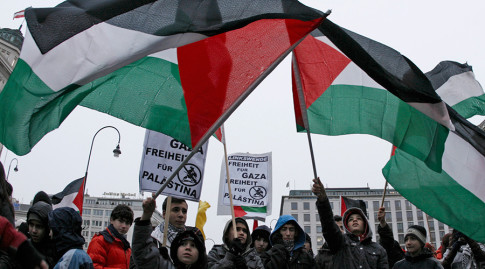 The Austrian parliament has canceled a March 8 ceremony commemorating female victims of WWII, allegedly because of concerns over a 90-year-old Holocaust survivor, who compares Israel to the Nazis, although a direct connection was denied.

The event was to be held on International Women’s Day, but was canceled two days after the invitations were sent, the Jerusalem Post learned on Sunday.

“In consideration for the concerns against some of the participants, the Austrian Parliament has canceled the event ‘In Grandmother’s Words: The Fate of Women in the Second World War,’” Parliament spokeswoman Marianne Lackner said.

“It had showed already that it is difficult to find witnesses for the project whose physical and health condition allows participation in the event. A short-term replacement of the podium is therefore not possible.”

The official avoided mentioning the name, Hedy Epstein, who was also to attend. The woman in her 90s stands accused by Israel of tarnishing its reputation. The Anti-Defamation League has strongly criticized her.

Epstein left her native Germany for Britain in 1939 with the aid of a program designed to rescue at-risk children.

When on Friday the invitations were sent off, Epstein’s description on paper was that of a peace and human rights activist, according to Haaretz. She was to be the only Jewish speaker at the canceled ceremony and was to talk of her wartime experiences.

However, Epstein’s accusers still remember a 2004 lecture where she had made the stark comparison between Nazi treatment of Jews to the Jewish treatment of Palestinians. She also took part in several attempts to break Israel’s blockade on the Gaza Strip, held by Hamas. She also advocated alongside the Boycott, Divestment and Sanctions movement seeking to hold Israel accountable for its actions.

Epstein is certainly not the only Jew to side with the Palestinians or to ever criticize her own government:  the winner of the Berlin Film Festival, Israeli director Udi Aloni, branded the Netanyahu government “fascist,” urging Germany to stop its support of the Jewish state.

Similarly, prominent international law firm, Milbank, has recently pulled out of funding Harvard Law student events because one was called ‘Justice for Palestine’. According to the Jerusalem Post, the firm had pledged $1 million in 2012 to be spent over the following five years. When the October event took place, it withdrew support.