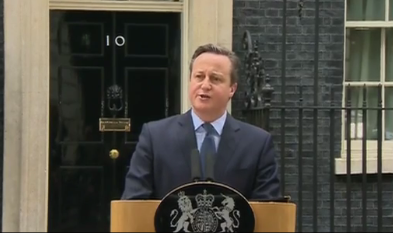 On Friday, David Cameron trumpeted a “deal” the British PM says he secured with the EU that will reduce the UK’s financial burden as it relates to refugees and other EU nations.

To be sure, the “agreement” seems more symbolic than anything. Indeed, it’s not even clear exactly what it is Cameron accomplished with negotiations in Brussels. Apparently, the UK won concessions on welfare curbs and financial regulation, and the ambiguity surrounding the agreement didn’t stop the PM from proclaiming he had secured “special status” for Britain in the EU.

I have negotiated a deal to give the UK special status in the EU. I will be recommending it to Cabinet tomorrow. Press conference shortly.

Other EU officials voiced their support for Cameron’s efforts.

Yes, “drama over.” Only not really, because now the British people will decide whether they agree with Cameron’s contention that “leaving Europe would threaten [the country’s] economic and national security” and that Britian “will be safer, stronger, and better off in a reformed European Union.”

Today, Cameron held the first Saturday cabinet meeting since the Falklands War in 1982 before announcing that a referendum on EU membership will take place on June 23. “The choice is in your hands, but my recommendation is clear,” he told his fellow Brits.

As Bloomberg notes, “Cameron was given a fillip on Saturday when Business Secretary Sajid Javid and Home Secretary Theresa May, both seen as wavering over which way to vote, threw their support behind the campaign to remain.”

“For reasons of security, protection against crime and terrorism, trade with Europe, and access to markets around the world, it is in the national interest to remain a member of the European Union,” May said. As a reminder, here’s what’s at stake for the UK financial sector:

It is now the task of the British electorate to decide whether it’s in their best interest to tie their fate to an increasingly unstable union. Cameron has given ministers free rein to campaign as they please for or against continued EU membership and as Bloomberg goes on to write, “divisions in the Conservative Party are evident.”

“Euroskeptics, including many in Mr. Cameron’s party, have said EU membership is undemocratic, costly and ties British businesses up with red tape,” WSJ reminds us. “They have argued that the U.K. must leave the bloc to regain sovereign control over a range of policies, from immigration to trade.”

At least one analyst says the timing of the referendum bodes well for UK risk assets and for sterling (the cable rallied on Friday after the “deal” was struck). Calling the referendum early gives limited time for the “leave” campaign to come up with a coherent rebuttal, Lombard Odier’s global strategist Salman Ahmed argues.

Maybe. But really, the “leave” campaign’s message is fairly straightforward and on that note, we close with the following tweet from firebrand Nigel Farage:

June 23rd: our golden opportunity. Let battle be joined. We want our country back.