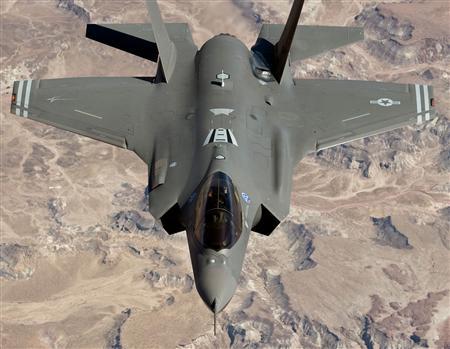 – Pentagon’s $1.5 Trillion F-35 Better at Killing Its Own Pilots than Enemy Combatants:

As is typical for the Pentagon’s continuous mismanagement of its enormous budget, the F-35 fighter program — with its $1.5 trillion cost to taxpayers so far — continues to be fraught with complications and failures.

According to an 82-page report released Monday, myriad flaws still plague the Pentagon’s F-35 Joint Strike Fighter aircraft, including an ejection system likely to break the necks of pilots under 136 pounds.

“Testing showed that the ejection seat rotates backwards after ejection. This results in the pilot’s neck becoming extended, as the head moves behind the shoulders in a ‘chin up’ position,” the report states.

In fact, less hefty pilots of all F-35 jets have already been restricted, as this issue is ongoing. According to the report, after recent failures of the ejection system as tested using 103- and 136-pound manikins,

“[T]he Program Office and Services decided to restrict pilots weighing less than 136 pounds from flying any F-35 variant … Pilots weighing between 136 and 165 are considered at less risk than lighter weight pilots, but still at an increased risk (compared to heavier pilots). The level of risk was labeled ‘serious’ by the Program Office based on the probability of death being 23 percent, and the probability of neck extension (which will result in some level of injury) being 100 percent.”

Lockheed Martin manufactures the fighters, but severe deficiencies listed in the new report call to question whether the F-35 program — which is “currently the most expensive in history,” as RT reported — should continue at all. In fact, the Pentagon has already spent over $400 billion, nearly twice its original estimate, on almost 4,500 F-35s. To attempt to keep costs under control, the military has proposed a “block buy” of 270 planes; but as the report asks:

“Is it premature to commit to the ‘block buy’ given that significant discoveries requiring correction before F-35s are used in combat are occurring, and will continue to occur, throughout the developmental and operational testing?

Not surprisingly, politicians — including Bernie Sanders — have cashed in on the F-35 program, despite its flawed manifestation. Though Sanders’ supporters often, and somewhat mistakenly, point to his anti-war stance, in 2014 the senator proudly brought the F-35’s manufacturing to Vermont — despite outrage from activists. Sanders argued the benefits would go directly to his state’s National Guard and economy, while blatantly ignoring the known flaws in the program — as well as the enormous costs.

The F-35 program might have been doomed from the beginning, considering the decision was made by the Pentagon to begin building the fighters before they were fully tested.

Lieutenant General Chris Bogdan, executive officer of the F-35 program, said there were “no surprises” in the new report, according to Military.com. “All of the issues are well known to [us], the U.S. services, international partners, and our industry team,” he stated, noting the analysis does indicate progress has been made.

That progress may only exist in the eye of the (budget) beholder, though, as Maxim noted Bogdan’s rather predictive statement from 2012 about the already issue-ridden F-35 program: “I don’t see any scenario where we’re walking back away” from it.