Ever since this Rothschild puppet and Bilderberg bastard left Deutsche I’ve put it on my watchlist: 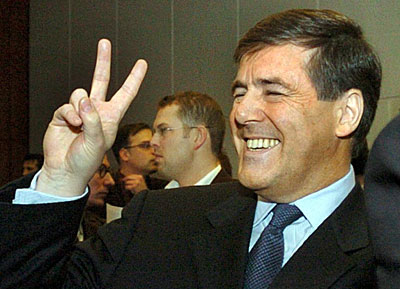 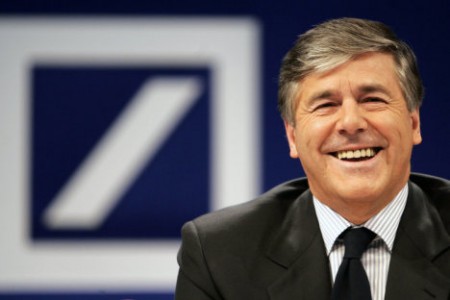 – Is It Time To Panic About Deutsche Bank?:

Back in April 2013, we showed for the first time something few were aware of, namely that “At $72.8 Trillion, The Bank With The Biggest Derivative Exposure In The World” was not JPMorgan as some had expected, but Germany’s banking behemoth, Deutsche bank.

Some brushed it off, saying one should never look at gross derivative exposure but merely net, to which we had one simple response: net immediately becomes gross when just one counterparty in the collateral chains fails – case in point, the Lehman and AIG failures and the resulting scramble to bailout the entire world which cost trillions in taxpayer funds.

We then followed it up one year later with “The Elephant In The Room: Deutsche Bank’s $75 Trillion In Derivatives Is 20 Times Greater Than German GDP.”

Then, last June, we asked the most pointed question yet: “Is Deutsche Bank The Next Lehman?” only this time it wasn’t just the bank’s gargantuan balance sheet risk shown below that was dominant… 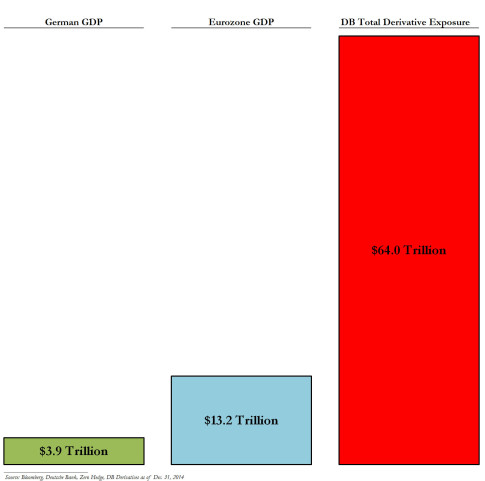 …. but the fact that it impaired assets had finally started to trickle down through to the income statement, leading to loss after loss, management exit after exit, market rigging settlement after market rigging settlement, and all culminating ten days ago with the bank’s “titanic”, and record, €7 billion loss, surpassing the bank’s troubles even during the depths of the Global Financial Crisis.

But while income statement losses can be brushed aside, far more troubling was that even other banks had started paying attention to the bank’s balance sheet. This is what Citi said:

We view the leverage ratio as the binding capital constraint for Deutsche. The current 3.5% is well below peers and the company’s own 4.5% target. Post restructuring & litigation charges and a Postbank divestment at 0.6x P/TB, we estimate a pro-forma leverage ratio of c3.3%. This implies a c€15bn shortfall, of which we expect part to be met by underlying retained earnings and part via AT1 issuance. However this still leaves an equity shortfall – we see a c4% leverage ratio by end-2017 – which is likely to necessitate a capital increase of up to €7bn in our view. In addition we note the target CET1 ratio of >12.5% only allows for a 0.25% management buffer above the fully-loaded SREP requirement. This provides the company with limited flexibility especially if BaFin were to introduce a counter-cyclical buffer (max 2.5% add-on).

And then there is the huge black hole that is China, and exposure to it… although others are starting to pay attention, and as New Europe wrote two weeks ago, “Major European banks… are significantly exposed to China and if there is significant deleveraging the impact will no doubt be global.”

Banks such as HSBC, such as Deutsche Bank.

We bring all this up because here is what the stock price of Deutsche Bank has done since our first warning about the huge potential risks borne by Deutsche Bank, back in April 2013 – earlier today it touched on fresh post-crisis lows and down substantially since we first started warning about it: 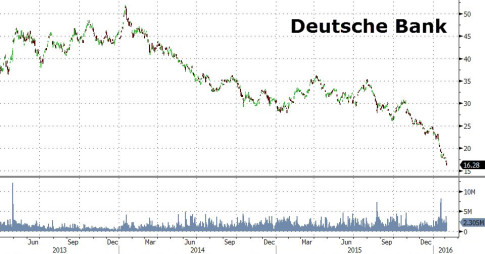 But the real chart everyone should be paying attention to – we certainly have been for a long, long time – is that of DB’s Credit Default Swaps, the earliest harbinger not of company risk, that has been there for a long, long time, but far more importantly of the market’s realization and admission of this risk, have been blowing up and screaming that something is very, very broken at the bank with the largest gross notional derivative exposure in the world. 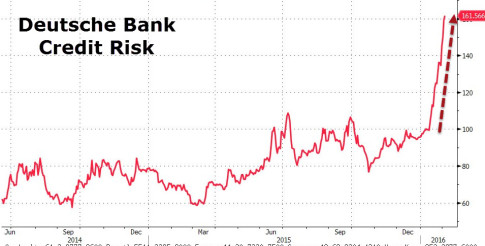 So, our question for today, is it time to panic about Deutsche Bank yet?