Three months ago we revealed what was the GOP’s biggest nightmare: Donald Trump dominating the polls, which he did from the first days in the GOP presidential primary. 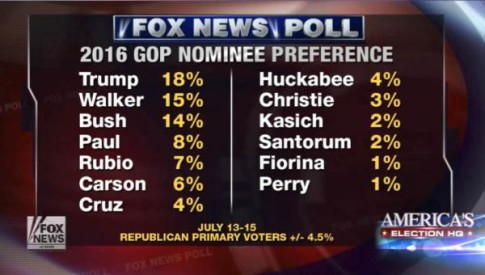 Since then, Trump’s ascent has only gotten steeper, forcing one after another political “expert”, talking head and pundit (it is unclear if the Huffington Post still covers Trump in its Entertainment section) to throw in the towel, and admit they have no idea how to read the American public.

Things only got worse for the GOP faithful when it was revealed that the man who was considered a frontrunner for the primary post, Jeb Bush, now appears to have run out of money. Earlier today Politico reported that Jeb Bush ordered across-the-board pay cuts to his struggling presidential campaign and warned staff that job functions would change.

On a Friday conference call, top officials said resources would shift heavily to ballot access and voter contact. One person on the Friday morning staff call said they were left with the impression that “very few people will be left in Miami.” Although campaign officials insisted they’re still in strong shape, the moves — combined with Bush’s stagnant poll numbers, despite millions having been spent by his Right to Rise super PAC on television ads over the last month — suggest otherwise.

The reason for what may be a surprising and premature end to Jeb’s campaign: his fundraisers have given up. According to the WSJ reports, “the family’s vaunted financial network is mostly disengaged and splintered—and his campaign stock is falling.”

The one-time front-runner for the Republican presidential nomination is roughly tied for third place among GOP contenders in campaign cash and has fallen to fourth or fifth place in national polls, including the latest Wall Street Journal/NBC News survey. His crowds are modest. He failed to dominate in either of the GOP debates, and million-dollar ad buys in Iowa and New Hampshire have barely moved the needle on his support in the early-contest states.

“Jeb’s just blended into the second tier of the Republican pack,” said Doug Corn, an Ohio-based financial adviser and top fundraiser for George W. Bush who hasn’t donated to a candidate this year. “When you run for president, you have to be very charismatic, you have to articulate extremely well and you have to show unbelievable amounts of passion.”

But while Jeb may be lacking in charisma, there is one candidates who oozes it. 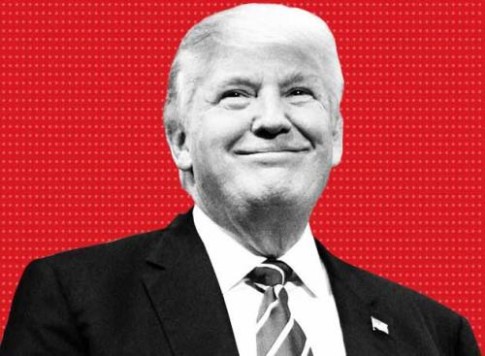 And with Trump seemingly able to absorb any and everything the media will throw at him, and actually thrives on it, and his teflon popularity rising week after week, not only have the naysayers given up, but far more importantly, the odds that Donald Trump wins the Republican presidential nomination are going up. Actually, make that soaring.

According to Politico, 81% of Republican insiders say the likelihood that Trump becomes their party’s nominee is more today than it was a month ago, and 79 percent of Democrats said the same. That’s according to the Politico caucus – a weekly bipartisan survey of top strategists, operatives and activists in the early-voting states of Iowa, New Hampshire, South Carolina and Nevada.

Some, such as this bitter, livid Iowa Republican, appear to have moved on beyond the anger and bargaining stage, and reached acceptance. “I can’t even describe the lunacy of him as our nominee. But reason has not applied to date in this race, and my hopes are fleeting that it will ever surface.” Lamented the Iowa Republican, who like all participants was granted anonymity in order to speak freely. If he thinks reason died in the race, he should come see what is going on in the so-called “markets”…

“Predictions of his demise keep not coming true,” said a New Hampshire Republican.

“Donald Trump being the GOP nominee is now within the realm of possibility,” asserted a South Carolina Republican.

“Maybe, just maybe, Trump wins an early contest or two. That will trigger a much stronger Stop Trump movement,” a New Hampshire Republican said. “The party will nominate Bob Dole — in 2016 —before it will nominate Trump. And a Trump nomination would result in a third candidate emerging.”

“The summer of Trump has lasted longer than conventional wisdom suggested it would,” a South Carolina Republican said. “It’s going to take a sustained, multi-pronged paid media effort to educate voters that Trump is not a conservative and has flip-flopped on practically every issue. Major donors are quickly getting to the place where they are ready to fund such an effort.” That’s odd, because many say the same (but inverse) about Hillary: she is not a progressive but is in fact a conservative – perhaps this is the first presidential election in which a Democrat pretends to be a Republican and vice versa.

“Numbers are numbers and you have to give them credence. I remain skeptical that he has the ability to turn people out, come primary day, but I [have] been wrong about this campaign every step of the way so far“, added a New Hampshire Republican, who like all participants responded via an online survey.

Yes, yes, we get it – everyone hates Trump, everyone was certain he would be crushed by now, and everyone was wrong precisely for those reasons.

And just as it was cool to bash Trump three months ago, suddenly it has become all too hip to predict his success: it is amusing how “experts” have become the laughing stock themselves, exposed as nothing more than clueless windsocks .

To be sure, not everyone is a hater:

Twenty-two percent of Caucus Republicans said Trump has a 50-50 shot at becoming the Republican nominee; the same percentage said he has a 30 percent chance. The rest of the respondents were divided, with the majority saying his odds are still less than 50 percent. But more than 8-in-10 GOP respondents said those are better odds than they gave Trump a month ago.

The results are notable because they represent a big shift in the thinking of POLITICO Caucus insiders, who this summer were deeply skeptical of Trump’s staying power.

“Trump will be among 3-4 finalists well into April; of that there is no doubt,” an Iowa Republican said.

But the punchline comes from this insider:

“I think he’s now mounting a serious campaign,” a South Carolina Republican said. “His stump speech had matured and even though the novelty of his candidacy is wearing off, his straight talk is appealing to people who are so sick of being lied to by the political class.”

And that is how the biggest Republican nightmare is coming true, because the bolded is all that really matters: if Trump can appeal to the silent, but vast majority – and so far he is doing just that – that is wholeheartedly sick of the fake left-right divide which has made a mockery of representative government and is pandering only to select special interests who have hijacked the US government in the past century, not only is the Trump’s nomination “looking more likely” but so is the Trump presidency.