– Meet “Stunningly Catastrophic” Patricia, The World’s Strongest Storm Ever Is About To Hit Mexico:

“Stunning, historic, mind-boggling, and catastrophic” is how Weather Underground’s Jeff Masters sums up Hurricane Patricia, which intensified to an incredible-strength Category 5 storm with 200 mph winds overnight as it approaches the Mexican coast. As The NY Times reports, The World Meteorological Organization warned that the hurricane’s strength was comparable to that of Typhoon Haiyan, which caused devastation in the Philippines in 2013, and so Mexico has declared a state of emergency for Puerto Vallarta (with officials warning that storm surges could cause waves of up to 39 feet) as she is forecast to hit the coast between 6 and 10pm ET.

At 2:46 am EDT October 23, 2015 an Air Force hurricane hunter aircraft measured a central pressure of 880 mb in Patricia, making it the most intense hurricane ever observed in the Western Hemisphere. The aircraft measured surface winds of 200 mph, which are the highest reliably-measured surface winds on record for a tropical cyclone, anywhere on the Earth. The previous strongest Eastern Pacific hurricane was Hurricane Linda of 1997, with a pressure of 902 mb (estimated from satellite imagery.) 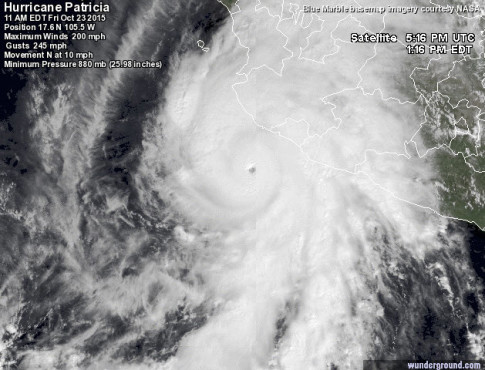 Patricia’s central pressure dropped an astonishing 100 mb in 24 hours, making it the fastest-intensifying hurricane ever observed in the Western Hemisphere. Patricia’s pressure at 5 am EDT Thursday, October 22, 2015 was 980 mb, and was 880 mb at 5 am EDT Friday. The previous record was a drop of 97 mb in 24 hours for Hurricane Wilma of 2005 (between 1200 UTC 18 October – 1200 UTC 19 October), according to the official NHC report for the storm. 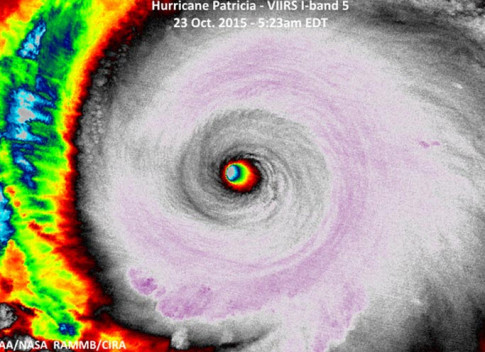 Patricia’s intensification rate was very close to the WMO-recognized world record for fasting-intensifying tropical cyclone: 100 millibars in just under 24 hours by Super Typhoon Forrest in the Northwest Pacific in 1983.

However, it is now recognized (Black 1992) that the maximum sustained winds estimated for typhoons during the 1940s to 1960s were too strong.

Some Mexican regions are at dire risk...

Hurricane #Patricia, the strongest storm on record in the E. Pacific, is bound for Mexico! https://t.co/ouR20nJ6Xppic.twitter.com/lCj3aQG7RO

The city of Puerto Vallarta and some of Mexico’s most popular resorts are in the path of the storm. Flooding and landslides are expected near coastal areas…

Satellite loops early Friday afternoon showed that Patricia’s cloud tops had begun to warm, indicating weakening, and with wind shear now a moderate 10 – 20 knots and interaction with land beginning to occur, Patricia will likely weaken to 155 – 175 mph winds by landfall. The storm’s expected turn toward the northeast has begun, and the storm is beginning to accelerate toward the coast of the Mexican state of Colima.

Regardless of northern motion per last advisory #Patricia jogging northeast now. Getting concerned about Manzanillo pic.twitter.com/qkDniGXM7Q

At particular risk is the city of Manzaillo, a regional center that straddles the back of a bay spanning several miles. On its current track, it apperas that Patricia could make landfall sometime between 6:00 and 10:00 pm EDT just to the northwest of Manzanillo–a trajectory that raises the odds of a catastrophic storm surge in or near Manzanillo. Patricia’s strongest winds are confined to a relatively small area, with hurricane-force winds only spanning a range of 30 miles from Patricia’s center. Category 5 winds of 156+ mph cover an area 15 miles across. Wherever those winds are focused, we can expect gigantic waves atop a devastating surge.

An unnamed 1959 hurricane–the deadliest in Northeast Pacific history, with an estimated 1800 direct and indirect fatalities–struck near Manzanillo on October 27…

As the storm approached, posts on Instagram showed people trying to leave Puerto Vallarta. One user posted a photograph of a message from a nearby resort that warned people to return home for their safety. “If this is not possible, please wait for further instructions for a possible evacuation,” the notice read.

In the United States, only three Category 5 storms that made landfall have been recorded, Mr. Feltgen said: a 1935 hurricane that killed more than 400 people; Hurricane Camille, which hit Mississippi and killed 244 people in 1969; and Hurricane Andrew, which hit Florida in 1992, killing at least 10 people there and three in the Bahamas.

But Hurricane Patricia is “uncharted territory,” as The Weather Channel’s Jim Cantore summed it up ominously…

Historic #Patricia God help these people in its path. pic.twitter.com/hLgDM3Xsz1

“We can’t underestimate the magnitude of this phenomenon,” Roberto Ramirez, chief of Mexico’s National Water Commission, said in a message streamed on the Internet Friday, urging residents to take precautions or evacuate. “A Category 5 hurricane could lift cars, destroy houses that aren’t built with steel, rebar and cement, and sweep people away.”