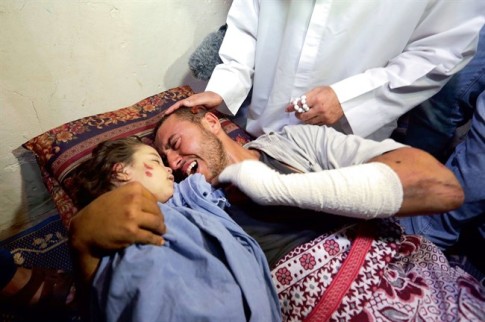 – ‘She kept screaming,’ says father of 2-year-old killed in airstrike:

GAZA CITY (Ma’an) — A doll and a few toys were the only belongings left by two-year-old Rahaf Hassan when she was killed along with her 25-year-old pregnant mother in an Israeli airstrike in southern Gaza City on Sunday.

Shortly before the attack, Rahaf and her mother had been safe in their family home, which lies among olive groves in an agricultural area, seemingly far from any military presence.

Israel claims that the house lay close to a military base used by Palestinian resistance fighters, justifying a missile fired by an M16 Israeli fighter jet that in the early hours of Sunday brought the house crashing down.

The family was trapped among the rubble, Rahaf’s father, Yahya, told Ma’an, and his two-year-old daughter screamed for him in the hope he would hurry to pull her out.

He listened to her helplessly, himself buried beneath the rubble together with his son.

Rahaf kept screaming, he said, with her voice gradually dying away until she died.

When Yahya realized that Rahaf had stopped screaming, he himself began to cry for help.

“I am here, help me! I can hear my son screaming, but I can’t hear Rahaf anymore — don’t forget her!” he shouted.

Yahya’s cousin Husam told Ma’an that the nearby building Israel’s warplanes targeted had “nothing to do with any military group.”

“What guilt has two-year-old Rahaf? Has she or her pregnant mother been launching missiles at Israel?”

The Israeli army said in a statement Sunday that the airstrikes targeted “two Hamas weapon manufacturing facilities in the northern Gaza Strip.”

The statement made no mention of any deaths or damage to civilian homes.

The strike came after a rocket was fired from the blockaded coastal enclave late Saturday that was destroyed by Israel’s Iron Dome defense system south of Ashkelon with no injuries reported.

Rahaf and her mother’s death brought the total number of Palestinians killed in the Gaza Strip to 11 since the beginning of this month, with nine others killed in clashes at the territory’s border fence, including two boys, aged 13 and 15, on Saturday.

The two were also the first Palestinians to be killed in an Israeli airstrike since last year’s devastating Gaza war, which saw around 2,300 Palestinians killed, most of them civilians.

Among those were 535 children, nearly 70 percent of whom were under the age of 12.

Yahya’s uncle, Abu Othman, lifted the remains of Rahaf’s doll and clothes. “Are these remains of a military site?” he asked.