As the twin blasts that ripped through Ankara on Saturday underscore, being around large gatherings of people who are protesting (peacefully or otherwise) in public places can be dangerous if you’re in a Mid-East war zone. Large crowds make for easy targets and as we’ve seen in Turkey, at least some governments seem to believe that inflicting casualties on civilians is a legitimate tool for shaping public opinion.

With that in mind, consider that on Tuesday, “insurgents” hit the Russian embassy in Damascus as more than 300 people gathered to express their support for Moscow’s intervention in Syria. As AFP reports:

Some 300 people had begun to gather for a demonstration backing Russia’s recent intervention in Syria when the rockets crashed into the embassy compound in the Mazraa neighbourhood of the capital, the journalists at the scene said. 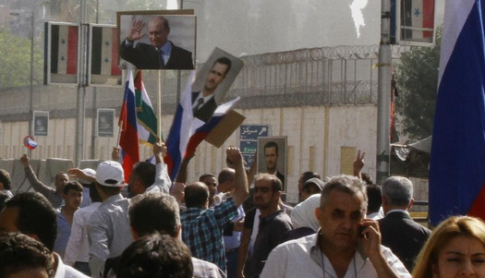 There was widespread panic among the demonstrators, who moments earlier had been waving Russian flags and holding up large photographs of Russian President Vladimir Putin.

Here’s a bit of amusing color from ABC:

Some held placards that read: “Thanks Russia” and “Syria and Russia are together to fight terrorism.”

Student Osama Salal, 18, said: “All the West stood against us. Only Russia backed us . we are all here to thank Russia and President Putin.”

Interfax says no one was killed or wounded. And here’s Lavrov: “This is… most likely intended to intimidate supporters of the fight against terror and prevent them from prevailing in the struggle against extremists.”

Meanwhile, the head of al-Nusra, Abu Mohamed al-Jolani, is out raising the spectre of the Soviet-Afghan war on the way to calling for a jihad against Russian civilians. We go back to AFP:

“If the Russian army kills the people of Syria, then kill their people. And if they kill our soldiers, then kill their soldiers. An eye for an eye,” Abu Mohamed al-Jolani, the head of Al-Nusra Front, said in an audio recording released late Monday.

He pledged that Moscow’s air war in Syria, which began on September 30, would have dire consequences for Russia.

“The war in Syria will make the Russians forget the horrors that they found in Afghanistan,” Jolani said, adding: “They will be shattered, with God’s permission, on Syria’s doorstep.”

“Delay the disputes until the demise and smashing of the Western Crusader and Russian campaign on Syrian land,” he said.

“I call on all armed factions to gather the highest number of shells and rockets and to hurl hundreds of rockets every day at the Nusayri villages, just like the scoundrels do to the Sunni villages and towns, to make you taste what our people are suffering,” Jolani said.

Nusayri is a derogatory term for Alawites, considered by Al-Nusra’s extreme interpretation of Islam to be apostates.

At the risk of overthinking things, both the “incident” in Damascus and the jihad call come at a rather convenient time for the West and its various regional, Sunni allies. President Obama has insisted that Russia will get itself into a “quagmire” in Syria only so far, the gains secured on the ground by Hezbollah and other troops loyal to Iran (with Russian air support) seem to suggest that this may end up being a rather quick victory.

Given that, it’s interesting that a Sunni extremist group which has received support from Assad’s Mid-East enemies should come out and describe the very same quagmire that Obama suggested would unfold. Additionally, lobbing rockets at civilians who are staging a pro-Russia rally might well be construed as a helpful tool in perpetuating the idea that Moscow’s involvement will make things worse for Syrians, another line parroted ceaselessly in the West.

Then again, the suggestion that Russian civilians will be targeted in retailiation for any civilians killed in Syria will only serve to support Putin’s “we must attack them before they come to our homes” pronouncement and thus isn’t likely to dissuade The Kremlin.

One should expect that the anti-Russian pronouncements from the various Sunni extremist groups fighting for control of the country will only increase in the coming days and weeks, and on that note, we suggest you first recall the following line from a leaked diplomatic cable ca. 2006 describing the preferred strategy for destabilizing the Assad regime…

— PLAY ON SUNNI FEARS OF IRANIAN INFLUENCE:  There are fears in Syria that the Iranians are active in both Shia proselytizing and conversion of, mostly poor, Sunnis.  Though often exaggerated, such fears reflect an element of the Sunni community in Syria that is increasingly upset by and focused on the spread of Iranian influence in their country through activities ranging from mosque construction to business. Both the local Egyptian and Saudi missions here, (as well as prominent Syrian Sunni religious leaders), are giving increasing attention to the matter and we should coordinate more closely with their governments on ways to better publicize and focus regional attention on the issue.

…and then consider the following from AP, describing more of Jolani’s jihad call…