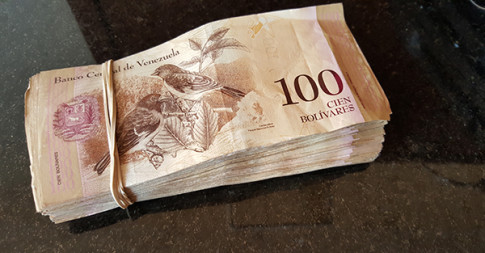 – Venezuela Is Now The Most Expensive Country In The World:

Forget Norway. Japan. Iceland. Switzerland. Or any of the other places around the world that are notorious for being painful on the wallet.

Venezuela is now the most expensive country in the world, hands down.

To give you an idea, the cost of a 15-minute taxi ride to the beach yesterday afternoon totaled an eye-popping $158.

(I paid less than that to rent a helicopter in Colombia last week.)

With all of its vast mineral resources, Venezuela should be the most prosperous country in Latin America by far. And it once was.

But years of corruption, incompetence, and central planning have taken their toll.

Normally, when huge companies like Exxon Mobil extract oil out of the ground, they reinvest a portion of their profits back into improving their operations.

They spend money on more infrastructure, technology, and exploration. In short, they invest in the future.

But in Venezuela, guys like Hugo Chavez and his successor Nicolas Maduro spent years funneling oil revenues into idiotic social programs designed to keep themselves in power.

Venezuela did not invest in the future. Now its oil infrastructure is rotting. Production is in serial decline. And the oil price has collapsed to boot.

This is bad news for a government that generates a huge proportion of its revenue from oil exports.

And just like how the United States and most of the West can’t balance their budgets without going even further into debt, Venezuela’s government also spends far more than it generates in revenue.

Especially now. With the government’s budget deficit at 14% of GDP, they’re barely able to make their debt payments this month without defaulting.

In fact, Venezuela is so screwed up that the government doesn’t have a hope of balancing its budget unless the oil price is between $100 and $120 per barrel.

Thus, they’ve had to resort to even more destructive ways of making ends meet.

The problem is: the Venezuelan bolivar isn’t used as a reserve currency around the world like the US dollar or euro.

That is what has enabled the US to get away with its relentless printing so far, as much of the resulting inflation is simply exported abroad.

Instead, here when they print bolivars, Venezuelans are stuck with all of it. Zimbabwe style.

Inflation in Venezuela has been among the highest in the world, with some private estimates as high as 800%.

Once that became a problem, their solution was to introduce price controls, which failed miserably. Venezuela infamously tried fixing prices in the grocery stores and ended up with crippling shortages of everything from beef to toilet paper.

Then they decided to try capital controls by forcing a completely absurd ‘official’ exchange rate to the local currency.

And that’s what makes this country so expensive.

The official rate of the bolivar is 6.3 per US dollar. But the black market rate is over 60x higher.

It’s an unbelievable difference. 6.3 under the official rate. 400 in the black market.

So depending on which exchange rate you use, Venezuela can either be one of the cheapest countries in the world, or the most expensive.

But as you can imagine, exchanging currency in the black market carries SEVERE penalties.

And that’s not all they’re doing to prevent people from protecting themselves against a rapidly depreciating bolivar.

(Though these efforts are easily defeated by using a VPN.)

Desperate to make ends meet in an environment where they see their savings and standards of living deteriorate by the day, many people have been driven to crime.

Caracas used to be a paradise; now it’s one of the most dangerous cities in the world.

It’s a damn shame too, because this is a really wonderful country. And were it not for the crime, Venezuela would be a top retirement destination, attracting many an expat looking to live like royalty on $1,000 per month.

But that’s not the case. Instead, Venezuela is sinking to rock bottom, and people here are suffering immeasurably.

All of this was brought on by yet another experiment in ‘central planning for the greater good’ gone dreadfully wrong.

They say the road to hell is paved with good intentions. Venezuela is a case in point, and shows just how short that road can actually be.

Westerners always think that these sorts of consequences can’t happen where they live, as if the laws of the financial universe only apply south of the border.

It’s not to say that the West will become Venezuela.

But if your government is already making its way down this path, taking on $60+ trillion in debt and printing limitless quantities of money, it’s seriously foolish to assume that that it will not end up somewhere similar.