While the world was focused on the content of Yellen’s Thursday speech in Amherst for clues on whether the Fed Chair would back off her disturbingly dovish outlook on the world, what was the real surprise was the delivery: as we showed previously, there was a very troubling 100 second interval at the very end of the 50 minute, 5,000+ word speech, in which the 69-year old Yellen suddenly seemed unable to read the words on the page, was rereading the same phrase over and over, paused for long stretches at a time, and then had a violent reaction that forced her to end her speech prematurely. Watch it again below.

In the aftermath of the incident, a narrative was quickly cobbled together that Yellen had suffered from dehydration, but based on her actions and behavior, that seems improbable.

But more disturbing was the Fed’s reaction. As the WSJ reports, a Federal Reserve spokeswoman declined Friday to say if Chairwoman Janet Yellen resumed a normal work schedule or sought follow-up medical attention a day after she appeared ill near the end of a long speech in Amherst, Mass. Ms. Yellen returned to Washington on Friday.

The Fed chairwoman, 69 years old, faltered roughly 50 minutes into a lecture on the economy and inflation Thursday at the University of Massachusetts Amherst. She stumbled over her prepared text, paused for long stretches several times, missed and jumbled some words in the text, and coughed before concluding her speech and leaving the stage.

The stumbles were unusual for Ms. Yellen, who has spoken at length in the past at congressional testimony, news conferences and other settings without appearing off-balance.

The Fed spokeswoman, Michelle Smith, on Thursday said Ms. Yellen “felt dehydrated at the end of a long speech under bright lights” and was seen by emergency medical technicians as a precaution, but “felt fine afterward” and attended a dinner on campus.

Bloomberg News reported Ms. Yellen appeared fine after her dinner and flew back to Washington on Friday from Hartford, Conn., telling fellow passengers at the airport that she felt better. “I look good now, don’t I?” she said, according to the news outlet.

Ms. Smith said Friday she didn’t want to comment beyond the Thursday statement.

Why the secrecy? In the New centrally-planned Normal, in which everything is a function of money printing, where the S&P500 is always just one Fed statement away from a crash, and where the head of the Federal Reserve is ostensibly a far more powerful figure than even the US president (a figure whose health is extensively evaluated for suitability ahead of the job), the public has a right and an obligation to know how fit to serve Yellen truly is, because whatever Thursday’s two minute swoon was, it was not mere dehydration.

Finally as we showed by the market reaction… 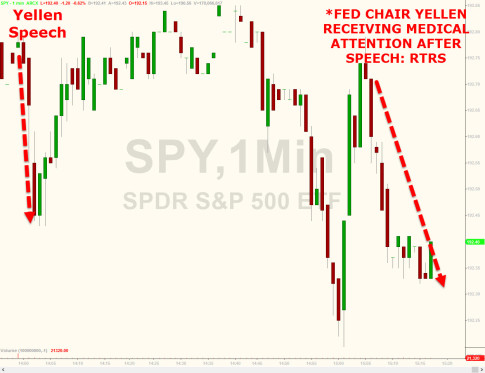 … equity futures most certainly took the sudden concerns about Yellen’s health into consideration when making buying and selling decision. Perhaps it is time to discuss just how credible and realistic the Fed’s contingency plans  are in a world in which Yellen is no longer fit to serve – a world in which former Bank of Israel head Stanley Fischer would be poised to take control over the world’s most important central bank?

1 thought on “Fed Refuses To Comment On Yellen’s Health”