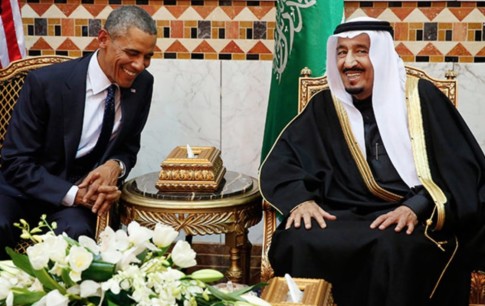 One of the U.S. government’s closest global allies, and a nation best known for an autocratic absolute monarchy in which women aren’t allowed to drive, beheadings take place on almost a daily basis, and where sentencing teenagers to death by crucifixion for political dissent is considered normal.

Considering the U.S. government holds the Saudis accountable for precisely nothing, it should be seen as no surprise that it’s princelings feel they have a right to behave like complete barbarians while here in America.

We learn from the Los Angeles Times that:

A bleeding woman screaming for help was seen attempting to scale an 8-foot-high wall before a Saudi prince was arrested this week on suspicion of trying to force a worker to perform a sex act on him at his hillside compound near Beverly Hills.

Police were called to the gated property in the Beverly Glen area, within a gated community on Wallingford Drive, after a caretaker at the home reported a disturbance, officials said. After officers interviewed people inside, a 28-year-old man identified as Saudi prince Majed Abdulaziz Al-Saud was arrested on suspicion of forced oral copulation of an adult.

When Collins drove home from work after 1:30 p.m., police followed his car through the gates and onto the property, which he described as a compound. The website Zillow valued the 22,000-square-foot property at $37 million.

Al-Saud was booked and freed on $300,000 bail Thursday afternoon, jail records show. He could not immediately be reached for comment.

The LAPD has a consul liaison division that checks with foreign nations’ consulates regarding diplomatic immunity, said Capt. Tina Nieto. Police determined Al-Saud does not have immunity in this case, she said.

So if he had diplomatic immunity it would be open season to sexually molest any American citizen?

Attempts to reach the State Department and the Saudi Embassy in Los Angeles were not successful Thursday afternoon.

It will interesting to see what sort of punishment he receives. My guess is absolutely none, considering the Saudi government has yet to be held accountable for its key role in the attacks of 9/11. In case you’ve been living under a rock…

David Stojcevski, a 32-year-old resident of Roseville, Michigan, was arrested for failing to pay a $772 fine stemming from careless driving. A court ordered him to spend a month in the Macomb County jail.

Over the next 17 days of his incarceration in a brightly lit cell—where he was denied clothing—he lost 50 pounds, suffered convulsions, and eventually began to hallucinate. He died in agony, from a combination of obvious, untreated drug withdrawal and galling neglect.

Making matters worse (if anything could be worse than that), the entirety of his demise was captured on jail surveillance footage. Indeed, Stojcevski was under self-harm watch—stemming for a profound misdiagnosis of his condition, which was drug addiction, not mental instability—and jail officials were supposed to be watching him constantly. Either their vigilance was inadequate, or they watched and simply didn’t care.

Stojcevski was a drug addict, and was taking Methadone, Xanax, and Klonopin to treat his addiction. But without access to these prescriptions, he quickly went into withdrawal while in jail, according to WDIV’s expert. Withdrawal caused him to behave irrationally, but jail officials ignored these obvious symptoms and instead placed him in a cell for the mentally unstable. He was stripped naked—so that he couldn’t hurt himself—and forced to languish under the unceasing bright lights (the jail doesn’t turn them off, even at night).

At the first, obvious sign of drug withdrawal, Stojcevski should have been given adequate medical treatment. He was not a violent criminal, or a danger to the public. He was a man who hadn’t paid a traffic ticket.

Not that I wanted to stray too far from the topic of Middle Eastern royals behaving badly in Southern California. In case you missed it, Qatari royals apparently started the whole trend.

Also from the LA Times:

And to Beverly Hills residents, obnoxiously.

The owner of a yellow Ferrari valued in the seven-figures captured on video speeding through stop signs and blazing past pedestrians in the wealthy city is Sheikh Khalid bin Hamad al Thani of Qatar’s ruling family.

But over the weekend, the twenty-something was just a guy driving a very fancy car very fast, police said. Al Thani denied to officers who investigated the incident that anyone was driving recklessly. He also said he had diplomatic immunity, Beverly Hills police said.

How do you say douche bag in Arabic?

But since the video went viral, Al Thani has fled the country, police said. The Ferrari and white Porsche seen in the video also are gone.

Watch the video of the car speeding through stop signs here: