Just three short years ago, Bank of England chief economist Andy Haldane appeared a lone voice of sanity in a world fanatically-religious Keynesian-esque worshippers. Admissions in 2013 (on blowing bubbles) and 2014 (on Too Big To Fail “problems from hell”) also gave us pause that maybe someone in charge of central planning might actually do something to return the world to some semblance of rational ‘free’ markets. We were wrong! Haldane appears to have fully transitioned to the dark side, as The Telegraph reports, he made the case for the “radical” option of supporting the economy with negative interest rates, and even suggested that cash could have to be abolished.

Speaking at the Portadown Chamber of Commerce in Northern Ireland, as The Telegraph reports, Mr Haldane’s support for a possible cut in rates came as the Bank as a whole has signalled that the next move in rates would be up.

Andy Haldane, one of the Bank’s nine interest rate setters, made the case for the “radical” option of supporting the economy with negative interest rates, and even suggested that cash could have to be abolished.

He said that the “the balance of risks to UK growth, and to UK inflation at the two-year horizon, is skewed squarely and significantly to the downside”.

As a result, “there could be a need to loosen rather than tighten the monetary reins as a next step to support UK growth and return inflation to target”.

But recent volatility in financial markets, prompted by China, and a decision by the US Federal Reserve to delay rate hikes, have pushed back expectations of the Bank’s first rate rise to November 2016.

Traditionally policymakers have resisted cutting rates below zero because when the returns on savings fall into negative territory, it encourages people to take their savings out of the bank and hoard them in cash. 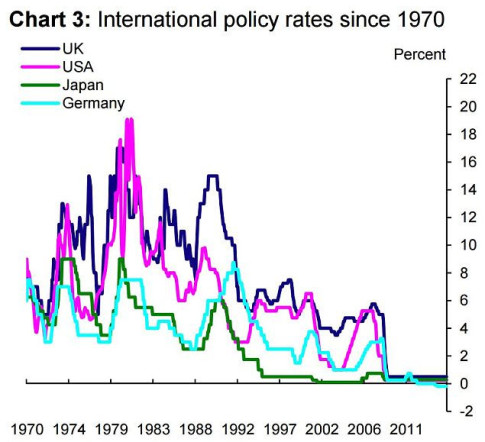 This could slow, rather than boost, the economy. It would be possible to get around the problem of hoarding by abolishing cash, Mr Haldane said

Interestingly, one idea, Haldane told an audience of business owners in Northern Ireland, could be to scrap cash and adopt a state-issued digital currency like Bitcoin. Although widely reviled as the currency for drug dealers and criminals, Haldane said Bitcoin’s distributed payment technology had ‘real potential’. Which may explain the Fed’s sudden fascination in the virtual currency.

NIRP – it would appear – is about to global.

So Haldane has gone from worrying that “financial markets were detaching themselves too materially from fundamentals” and fearing the “biggest risk to global financial stability right now it would be a disorderly reversion in the yields of government bonds globally,” the BoE’s chief economist has not only called for policies which will enable an even bigger bond bubble but will also remove freedom from the people to do what ‘they’ think is best with their capital. Indoctrination is complete (or more ominously, is there something Haldane sees that has driven him to this extremist perspective?)