– Behold The European Recovery: Deutsche Bank To Fire 25% Of All Workers

Deutsche Bank has witnessed an exodus of executives this year in what’s been a tough stretch for the German lender. Here’s a brief recap of the bank’s recent trials and travails for those who need a refresher:

The bank, which has paid out more than $9 billion over the past three years alone to settle legacy litigation, has become something of a poster child for corrupt corporate culture.

In April, Deutsche settled rate rigging charges with the DoJ for $2.5 billion (or about $25,474 per employee) and subsequently paid $55 million to the SEC (an agency that’s been run by former Deutsche Bank employees and their close associates for years) in connection with allegations it deliberately mismarked its crisis-era LSS book to the tune of at least $5 billion.

But it was out of the frying pan and into the fire so to speak, because early last month, the DoJ announced it would seek to extract a fresh round of MBS-related settlements from banks that knowingly packaged and sold shoddy CDOs in the lead up to the crisis. JP Morgan, Bank of America, and Citi settled MBS probes when the DoJ was operating under the incomparable (and we mean that in a derisive way) Eric Holder but now, emboldened by her pyrrhic victory over Wall Street’s FX manipulators, new Attorney General Loretta Lynch is set to go after Barclays PLC, Credit Suisse Group AG, Deutsche Bank AG, HSBC Holdings PLC, Royal Bank of Scotland Group PLC,UBS AG and Wells Fargo & Co.

As for the employee exodus:

Co-CEOs Anshu Jain and Jürgen Fitschen were shown the door (well, technically they resigned, but with shareholder support plummeting amid skepticism about both financial targets and ongoing legal problems, it’s easy to read between the lines) in June after which the bank’s global head commercial real estate Jonathan Pollack defected to BlackStone. Pollack’s departure came just one month after the bank’s head of structured finance Elad Shraga left to start his own fund. Shraga was instrumental in helping Deutsche become “an award-winning arranger of asset- and mortgage-backed debt.” Shraga had been with Deutsche Bank for 15 years.

Well now – and this follows similar cuts across Wall Street and underscores the extent to which Mario Draghi hasn’t succeeded in printing the EMU back to economic prosperity – quite a few more employees will be departing, only this time, the departures will be … how should we put this … oh yes, “mandatory.” Here’s Reuters:

Deutsche Bank (DBKGn.DE) aims to cut roughly 23,000 jobs, or about one quarter of total staff, through layoffs mainly in technology activities and by spinning off its PostBank (DPBGn.DE) division, financial sources said on Monday.

That would bring the group’s workforce down to around 75,000 full-time positions under a reorganization being finalised by new Chief Executive John Cryan, who took control of Germany’s biggest bank in July with the promise to cut costs.

Cryan presented preliminary details of the plan to members of the supervisory board at the weekend.

The bank is primarily reviewing cuts in the parts of its technology and so-called back office operations that process transactions and work orders for client-facing staff. A significant number of the some 20,000 positions in that area will be reviewed for possible cuts, a financial source said.

Whether or not the move will do anything to appease impatient shareholders (the same shareholders who ultimately forced out Jain and Fitschen for foot-dragging on efforts to boost profitability) or, more importantly, to improve the bank’s utterly corrupt corporate culture remains to be seen but we can’t say we’re optimistic.

The cuts, it should be noted, aren’t unexpected. As Cryan noted after taking the helm, “the investment bank’s securities and derivatives trading businesses can’t continue to soak up capital. We cannot afford that luxury. Reducing this reliance should not place us at a competitive disadvantage as the market has anyway already moved in that direction.” Fair enough. We just hope there are still some competent people around to manage this: 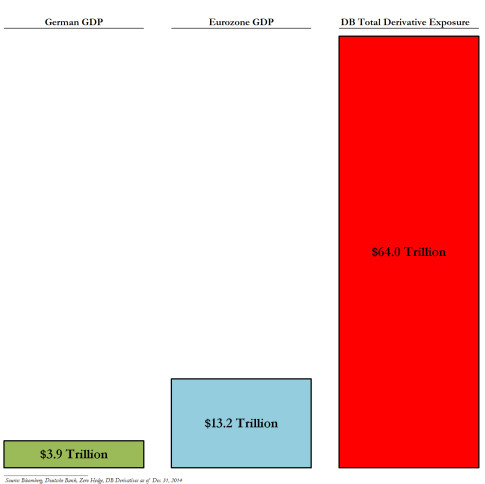