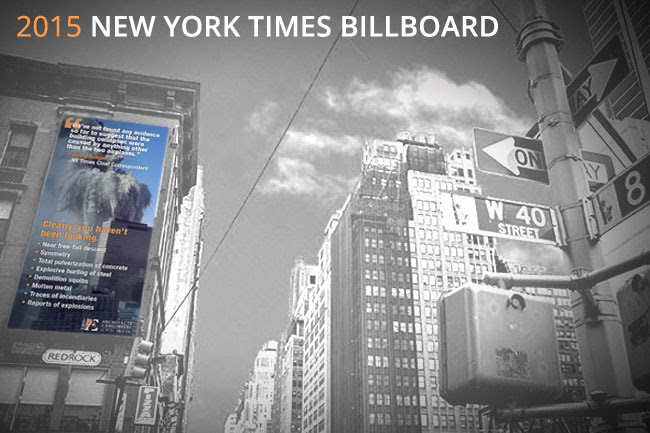 Rock-Bottom Price for Billboard Just Feet Away from

Are you in favor of calling out The New York Times this September for its total failure to report on the evidence of controlled demolition? If so, we have some great news for you!

Just last week, the owners of the billboard directly across the street from The New York Times — a spot that usually goes for more than $20,000 — offered it to us for a rock-bottom price of $9,000 for four weeks!

This incredible opportunity to amplify our message during the 9/11 anniversary cannot be missed! If you would like to see this billboard go up next week, please chip in what you can to help make it possible. We must raise the necessary funds by the end of Labor Day weekend.

Taking the Times to Task

As many of you will remember, in December 2013 The New York Times’ chief Washington correspondent David Sanger told one of AE911Truth’s C-SPAN callers, “We’ve not found any evidence so far to suggest that the building collapses were caused by anything other than the two airplanes.” In response, over 1,000 AE911Truth supporters emailed Sanger and the Times to tell them, “Clearly, you haven’t been looking.”

Now we’re sending that message even more loudly. And once we’ve got their attention, every editor and reporter who works in The New York Times Building will also receive the Beyond Misinformation booklet — leaving them no excuse to say they haven’t found any evidence. On top of that, our impossible-to-miss billboard will be seen by 100,000 people each day throughout the month of September.

With a modest contribution, you can help AE911Truth capture the attention of the nation’s “newspaper of record” — and of millions of New Yorkers and tourists. Thank you for helping to make this the most educational 9/11 anniversary yet. 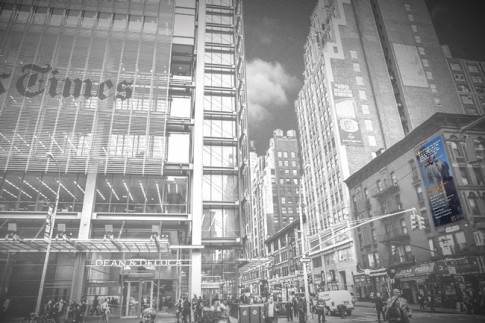 Support them if you can.