While the kneejerk headling scanning algos are focusing on the seasonally-adjusted headline monthly NFP increase which came in a worse than expected 173K, the presidential candidates – especially the GOP – are far more focused on another data point: the labor force participation rate, and the number of Americans not in the labor force. Here, they will have some serious ammo, because according to the BLS, the main reason why the unemployment rate tumbled to the lowest since April 2008 is because another 261,000 Americans dropped out of the labor force, as a result pushing the total number of US potential workers who are not in the labor force, to a record 94 million, an increase of 1.8 million in the past year, and a whopping 14.9 million since the start of the second great depression in December 2007 while only 4 million new jobs have been created. 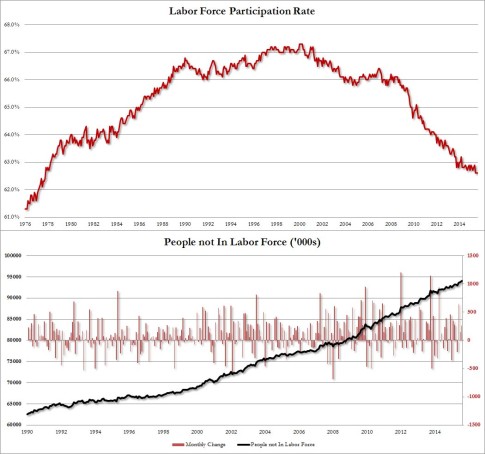 And since there are still those confused why wages so stubbornly refuse to rise, here is our favorite labor-related chart, showing the annual increase in average hourly wages superimposed next to the US civilian employment-to-population ratio, which remains solidly below 60%, and has barely risen since the great financial crisis. 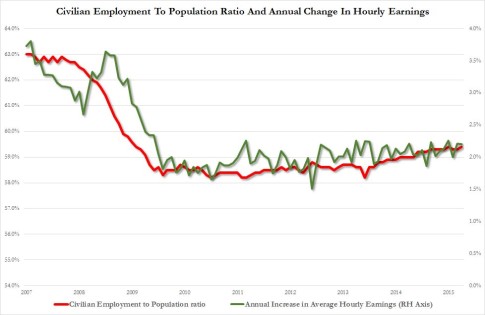 2 thoughts on “Record 94 MILLION Americans Not In The Labor Force; Participation Rate Lowest Since 1977”