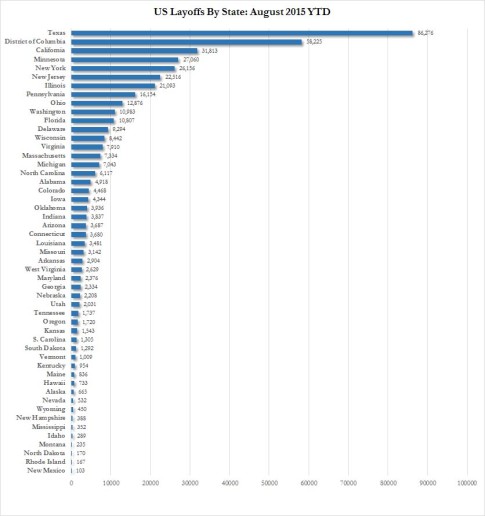 Moments ago Challenger reported August job cuts, which at 41,186 were a 60% drop from the 115,730 reported last month (the highest since September 2011), which however was driven by a one-time mass layoffs last month in military staffing. Putting August in its correct perspective, the number was 2.9% higher than the same month a year ago, when 40,010 planned job cuts were announced.

What is troubling is that this marks the seventh month this year that the job-cut total was higher than the comparable month from 2014.

What is worse is that for all the euphoria about initial claims printing at or near record lows, the reality as measured from the bottom-up, is far different and as Challenger notes, so far in 2015 employers have announced 434,554 job cuts: that is up 31 percent from the 332,931 planned layoffs in the first eight months of 2014.

In other words, not only is the economy no longer growing at its previous pace, but due to the ongoing oil rout, tens of thousands of highly-paid workers mostly in the oil space are getting pink slips just as the Fed is preparing to tighten. Putting a number to that estimate, Challenger says that “since the beginning of the year, oil prices have been blamed for 82,268 layoffs, mostly in the energy sector, but also among industrial goods manufacturers that supply equipment and materials for oil exploration and extraction.” 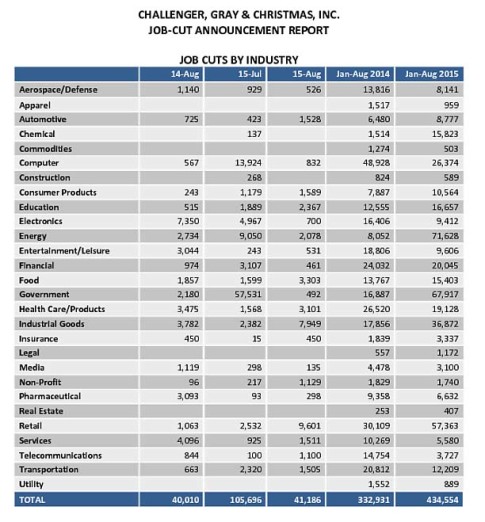 Curiously, the biggest culprit for August job cuts was not the energy sector (expect many more layoffs here), but retail. The retail sector saw the heaviest job cutting in August, with 9,601 planned layoffs reported during the month. Most of those were related to bankruptcy of east coast supermarket chain A&P, which is closing more than 100 stores and laying off a reported 8,500 workers by Thanksgiving.

“Overall, retail is relatively healthy, but we have seen some big layoffs this year, particularly from long-time players that simply have not been able to keep up with changing consumer trends. These retailers somehow manage to survive, but only through multiple bankruptcies, such as A&P. Earlier this year RadioShack announced 5,400 job cuts,” said John A. Challenger, chief executive officer of Challenger, Gray & Christmas.

The industrial goods sector saw the second heaviest downsizing activity in August, announcing 7,949 layoffs during the month. That is the largest number of job cuts for this sector since March, when 9,163 job cuts were announced.

Finally, going back to oil, Challenger was optimistic, however this optimism is misplaced. This is what it said:

There is a problem: as ConocoPhillips just announced two days ago when it fired 10% of its global workforce, oil companies which had been betting on an oil rebound, all got flatfooted by the second drop in oil price. This will lead to tens of thousands of more highly paid jobs being pink slipped in the coming months.

“It is too soon to say if we have seen the last of the big oil cuts. As we head into the final months of 2015, there are definitely some red flags that suggest we may see more layoffs from the energy sector, as well as in other areas of the economy. The problems that China is facing could send shockwaves throughout the global economy, including the United States,” Challenger continued.

Finally, one thing that is certain: of all states, Texas continues to bear the brunt of the layoff pain. And if oil continues trading in the $30/$40 range, the pain is far from over.