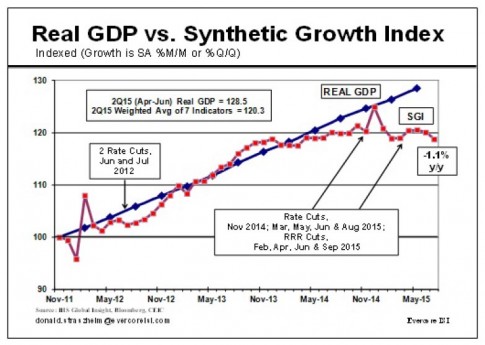 With Chinese data now an official farce even among Wall Street economists, tenured academics, and all others whose job obligation it is to accept and never question the lies they are fed, the biggest question over the past year has been just what is China’s real, and rapidly slowing, GDP – which alongside the Fed, is the primary catalyst of the global risk shakeout experienced in recent weeks.

One thing that everyone knows and can agree on, is that it is not the official 7% number, or whatever goalseeked fabrication the communist party tries to push to a world that has realized China can’t even manipulate its stock market higher, let alone its economy.

But what is it? Over the past few months we have shown various unpleasant estimates, the lowest of which was 1.6% back in April.

Today we got the worst one yet, courtesy of Evercore ISI, which using its own GDP equivalent index – the Synthetic Growth Index (SGI) – gets a vastly different result from the official one, namely Chinese growth of -1.1% annually. Or rather, contraction.

To wit, from Evercore:

Our proprietary Synthetic Growth Index (SG!) fell 1.1% mim in July, and was also down 1.1% y/y. No wonderglobal commodities are so weak. The most recent 18 months have been much weakerthan the 2011-13 period. Even if we adjust our SG I upward (for too-little representation of Services — lack of data), we believe actual economic growth in China is far below the official 7.0% yly. And, it is not improving, Most worrisome to us; the ‘equipment’ portion of Plant & Equipment spending is very weak, a bad sign for any company or country. Expect more monetary and fiscal steps to lift growth.

And here is why the world is in big trouble.