“China is using pension funds to try and shore up their failing markets. How would you like your pension funds used by the government to stop the implosion? This tells me they are in deeper trouble than they have admitted…..”

And it is the Chinese people that are in real trouble.

A polluted environment, toxic food and a failing illusion of economic growth & prosperity.

And you don’t want to live in Shanghai when the greatest financial collapse in world history will happen. 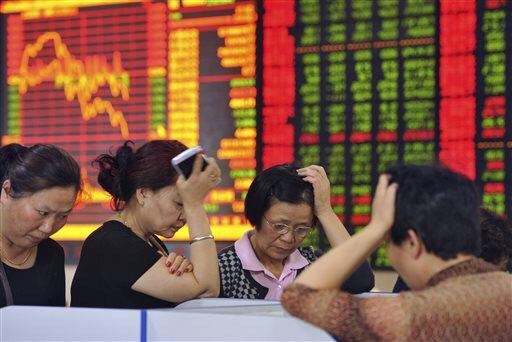 China plans to let its main state pension fund invest in the stock market for the first time, the country’s official news agency, Xinhua, has reported.

Under the new rules, the fund will be allowed to invest up to 30% of its net assets in domestically-listed shares.

The move is the latest attempt by the Chinese government to arrest the slide in the country’s stock market.

The fund will be allowed to invest not just in shares but in a range of market instruments, including derivatives. By increasing demand for them, the government hopes prices will rise.

The Shanghai Composite Index closed down more than 4% on Friday after figures showed monthly factory activity contracting at its fastest pace in six years.

It capped a tough few days for Chinese investors, with the index down 12% on the week. Chinese shares are now down more than 30% since the middle of June.

Earlier this month, the Chinese central bank devalued the yuan in an attempt to boost exports.

These measures come against a backdrop of slowing economic growth in China. In the second quarter of this year, the country’s economy grew by 7% – its slowest pace for six years.

Last year, the economy grew at its slowest pace since 1990.