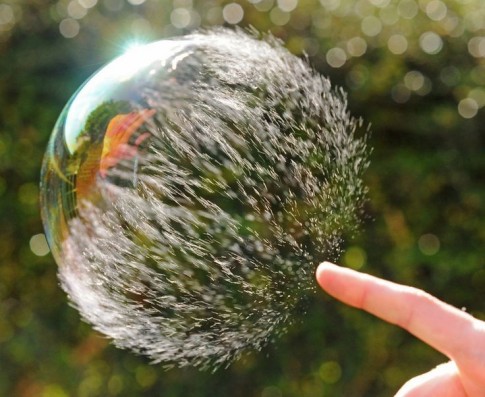 This was a difficult piece to write, and an equally difficult piece to title, because the people who most need to see this message are simultaneously the least-likely to read it. How do you steal anything? Boiled down, there are only two procedures: doing so via brute-force (i.e. robbery), or doing so by deception (i.e. fraud).

This is primarily a warning about the latter form of stealing, although ultimately there will be brute-force employed, for any who attempt to resist the mass-foreclosures and mass-evictions which are now imminent. To explain how your land will be stolen from (most of) you – by fraud – first requires a brief lesson in economics, conducted via a simple, hypothetical scenario.

The easiest way to illustrate any economics (or mathematical) principle is through the use of an extreme example, so we will envision a real estate market (in this case, Canada’s market) at two, opposite extremes: one purely hypothetical, the other the real-life nightmare that we see currently.

Imagine a real estate market with the rate of interest on mortgages as high as it could possibly go. For the sake of providing a concrete number; let’s say 1,000,000% interest. We can say, with certainty, what conditions would be like in such a market. Apart from the (very) small number of buyers who are ready/willing/able to pay-in-full for their property (and thus require no mortgage), let us assume – for convenience – that only one person could still afford a mortgage: the Richest Person in the land.

Putting aside the tiny number of cash-buyers who are always present in any real estate market (and thus cancel themselves out); we would have only one buyer in this market – the Richest Person. But (as always) there would be lots of people wanting to sell their homes. With a population the size of Canada; at any given moment there are hundreds of thousands of homeowners wanting to sell their property.

The higher that mortgage rates get, the less potential buyers who can afford to remain in the market, until (ultimately) there is only One Buyer left, and real estate prices are at their ultimate, theoretical low. As with any mathematically based principle; the reverse is also true. So let’s look at a real estate market at the opposite extreme – the Western real estate market.

In this extreme; mortgage rates are frozen as low as they could possibly go, like our mortgage rates. For convenience; let’s assume that “everyone” could afford to buy a home in this scenario…at least at first. But what do we know about the prices in such a market?

Now observant readers should begin to see the “fraud” previously mentioned taking shape here. Knowing that the lowest, possible mortgage rates guarantee the highest possible prices, our governments – more specifically, our central banks – took interest rates as low as they could possibly go, and froze them there.

The central banks have taken interest rates as low as they could possibly go, to deliberately create real estate bubbles, all across the Western world. Then they froze these ultra-low/ultra-extreme interest rates, so that these bubbles could grow to their maximum, possible size.

How do we know this was deliberate fraud, and how do we know that our (corrupt) governments are willing partners (actually servants) in this fraud? Simple. To begin with; the central bankers themselves already proved that ultra-low interest rates don’t work. That case study is called “Japan”.

Thirty years ago; Japan’s central bank permanently froze its own interest rate at near-zero. Twenty-five years ago; it had already proved to the world (via its own failure) that ultra-low interest rates (as a long-term policy) did not work, would never work, and could never work. Now all of the central banks, across the entire Western world have been copying Japan, with the full support of our corrupt governments.

Are all the central bankers, across all the governments of the Western world “idiots”? That’s not what we’re told. What we’re told, by our governments, by the Corporate media, by the charlatan economists, and by the bankers, themselves, is that these central bankers are the smartest people our governments could find. Ipso facto, if they’re not all idiots, then they all have an ulterior motive: creating the Mother of All Bubbles.

But that is only one way of proving the deliberate fraud which is at work here. The other way to prove this is to simply note the obvious fact that all of these central bankers lied to us. Back at the beginning of 2009, when they began pumping-up the Mother of All Bubbles (except for the U.S., which had an eight-year head start); the central bankers promised us – vehemently and collectively – that these ultra-low/ultra-insane interest rates were very, very temporary.

We know this is deliberate fraud, because our governments and the central banks (and the Corporate media and the charlatan economists) are also lying to us about inflation. The Liars lament that inflation is “too low” (complete with regular, crocodile tears).

Why the Fed Worries Inflation is too Low [Bloomberg, May 2013]

Why are they trying to deceive us about inflation? Because if they acknowledged the high inflation, the central bankers would be forced to raise interest rates dramatically (and end the bubbles, prematurely) since higher interest rates are the only (legitimate) “prescription” for the disease of inflation – other than a responsible monetary system.

The central bankers created these real estate bubbles with their low interest rates. They created this high inflation (with their insane/excessive money-printing). They lied to us about interest rates. They lied to us about the inflation. Need more proof of fraud? Why did they create all this inflation, in the first place – with the most-extreme money-printing in history?

They did so because high inflation is the second-biggest driver of real estate bubbles, behind only ultra-low mortgage rates. What do people do when inflation is devouring any/all wealth in paper form? For those who do not convert their wealth into gold or silver, they flee into real estate.

These Criminals were not content with merely creating one “driver” for the Mother of All Bubbles, taking interest rates as low as possible, and freezing them there. They also created the second biggest driver of real estate bubbles – high inflation – and have also taken it to the greatest extreme possible (while pretending it doesn’t exist).

Is this just a “coincidence” (year after year after year)? Or, is it part of a larger fraud? For readers who remain skeptical; we have just begun to scratch the surface on this Crime of the Millennium. Part II will dig deeper. We will see who (precisely) is behind this massive fraud, why they are endeavouring to (literally) “steal all our land”, and readers will also see how this fraud is being perpetrated, in even greater depth.

3 thoughts on “How Western Governments Will Steal Your Land, Part I”