– This Alarming Indicator Is Back At A Level Last Seen 10 Days Before The Bear Stearns Collapse (ZeroHedge, Aug 14, 2015):

One of the most disturbing and recurring themes highlighted on this site over the past year has been the ever greater disconnect between the worlds of equity and fixed income, whether in terms of implied volatility, or actual underlying risk. 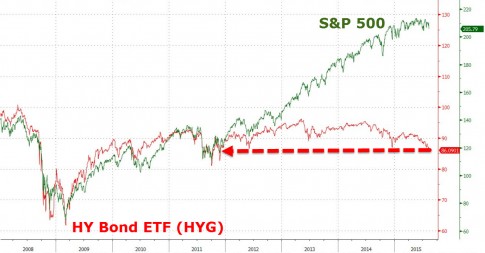 It turns out there is an even more acute, and far more concerning divergence, which was conveniently pointed out overnight by Bank of America’s Yuriy Shchuchinov, one which again looks at the spread between credit and equity. Specifically, BofA notes that in just the past two weeks, credit spreads from our HG corporate bond index have widened another 9bps to 164bps while equity volatility is down another percentage point (although technically BofA uses the 3rd VIX futures as its measure of equity volatility rather than VIX itself to get a smoother series that is less affected by the daily noises and seasonalities).

This is how the resulting dramatic divergence looks like: 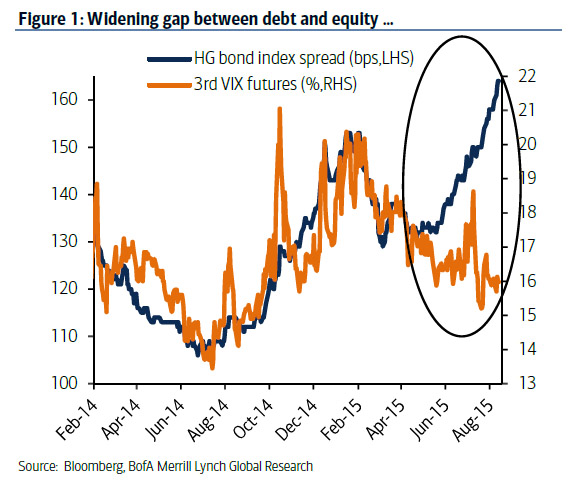 Why is this notable?

In BofA’s own words: “this spread currently translates into 10.26 bps of credit spread per point of equity vol, the level reached on March 6, 2008 – ten days before Bear Stearns was forced to sell itself to JP Morgan for $2/sh. Recall that – unlike the credit market – the equity market well into 2008 was very complacent about the subprime crisis that led to a full blown financial crisis.” 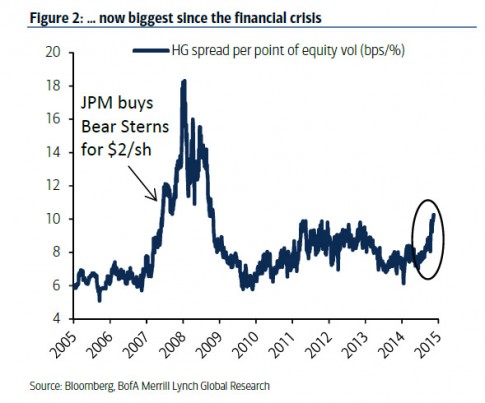 In other words: unprecedented equity complacency matched by a state of near bond market panic.

BofA is quick to note that it is “not predicting another financial crisis” but believes “it is important to keep highlighting to investors across asset classes that conditions in the high grade credit market are currently very unusual.”

The key reason for this weakness is that our market has transitioned from “too much money chasing too few bonds” to “too many bonds chasing too little money”. That shift is motivated by the impending Fed rate hiking cycle as issuance, M&A and other shareholder friendly activity has been accelerated while at the same time demand has declined. Again, we are not trying to predict a crisis – only to point out that the upcoming rate hiking cycle appears to concern issuers and investors so much that they have been taking real actions that have repriced our market lower relative to equities to an extent that we have only seen during the financial crisis.

And, of course, there is the whole deflationary commodity collapse-slash-China crash/devaluation/bursting credit/housing/market bubble, which also is a screaming read flag, but which stocks have also decided to ignore because, well, “central banks got their back.” Until they don’t.

In the meantime, we can’t wait to find if this is the first time in the history of capital markets when it is stocks that are right, and bonds wrong. Because if not, we are confident that nobody, certainly no equity traders, is positioned in a way that another Bear Stearns-type blow up will be merely chalked away to the ever growing list of things that one should simply ignore and focus on an S&P which remains just a few percentage points below its all time record high.