Late in July, the Anti-Media reported that Turkey joined the U.S. led coalition conducting airstrikes against the Islamic State (IS, ISIS, ISIL). Since then, it has become clear that Turkey’s strategy is part of a larger agreement with the U.S. to conduct a war against “extremism” in the region.

The deal between the U.S. and Turkey has the following contours: Turkey will allow the U.S. to use its military base at Incirlik to conduct airstrikes against the Islamic State. In exchange, the U.S. will allow Turkey to create a buffer zone on Syrian soil free of Islamic State and Kurdish fighters. The stated aim of the “safe zone” is to create a refuge for internally displaced Syrian civilians inside Syria. According to the New York Times,

“The plan would create what officials from both countries are calling an Islamic State-free zone controlled by relatively moderate Syrian insurgents, which the Turks say could also be a ‘safe zone’ for displaced Syrians.” 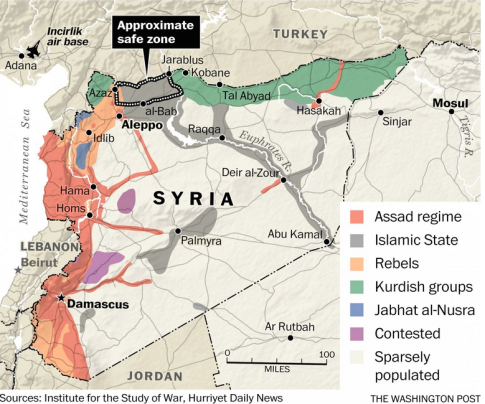 For Turkey, however, the real aim is to prevent the YPG Kurdish fighters from linking up their three zones of control (Efrin, Kobani, and Cizir pictured below; Tal Abyad is already under YPG control) in northern Syria with each other. These Kurdish fighters also happen to be the sole force that has shown the ability to effectively defeat ISIS in battle. However, the real aim of Turkey was voiced by the leader of the Kurdish opposition party—HDP— in the Turkish parliament, Selahattin Demirtas:

“‘Turkey doesn’t intend to target IS with this safe zone. The Turkish government was seriously disturbed by Kurds trying to create an autonomous state in Syria,’ he said, adding that ‘the safe zone is intended to stop the Kurds, not IS.'”

It is a poorly-kept secret that the YPG intends to create an independent state in northern Syria, known as Rojava. The YPG has already been accused of ethnically cleansing the non-Kurds from that region as a precursor for a Kurdish state. The YPG—and its civilian arm, the PYD—are linked to the PKK (Kurdistan Workers Party), a Kurdish separatist group that Turkey, the U.S., and the E.U. consider a terrorist organization. At 14.5 million, Turkey has the largest population of Kurds in the southeastern part of its territory. The PKK waged a long war with the Turkish state during the 1980s and the 1990s that killed about 30,000 people.

Encouraged by the gains of the YPG in northern Syria, the PKK seems to have re-started its war with Turkey. This new war started when on July 2oth, an IS suicide bomber blew herself up in the southern Turkish border town of Suruc. The attack killed 32 Kurdish youths and left more than 100 wounded. The Kurdish youths were meeting to organize a rebuilding effort of the town of Kobani in Syria. Suruc played a pivotal role in helping YPG rebels take control of Kobani and Tal Abyad from IS.

The PKK blamed the IS attack on the indifference the Turkish state has shown towards IS. The PKK retaliated against the Turkish state by killing two Turkish police officers. These attacks were followed by another that killed three Turkish soldiers, a police officer, and a civilian. On August 2nd, a car bomb killed two Turkish soldiers and injured 31 when it blew up close to a police station in the Southeastern Turkish town of Dogubayazit.

For its part, the Turkish military responded by attacking PKK positions in northern Iraq (the Kurdistan Regional Government of Iraq has allowed the PKK to have bases there). There are also reports that the Turkish military attacked YPG positions in northern Syria. Not only that, the Turkish state has initiated a crack-down on PKK and other militants, arresting 590 people on terror charges inside Turkey. Even more sinister is president Erdogan’s call to strip the immunity of parliamentarians with alleged ties to the PKK.

According to sociologist Max Weber, a state is an entity that has a boundary, has sovereignty (controls what happens within its boundary), has the ability to legitimately use force, and the ability to tax and borrow. Whenever any of these functions are threatened, a state responds with violence towards the source of the threat.

The PKK poses a serious threat to Turkey’s territorial integrity and sovereignty. It is hard to fathom a situation where Turkey will ever allow an independent Kurdish state, whether in northern Iraq, in Syria, or in Turkey. For the Turkish state, the Kurdish threat is far more serious than the threat from ISIS. If the Kurds are successful in their bid for their own state, they will detach about a third of Turkey’s territory (to understand the seriousness of the Kurdish challenge to the Turkish state, just imagine what the American government would do if a separatist Mexican movement sought to detach the southwest from the United States and create an independent state). The seriousness is underscored by the declarations of the president of Turkey regarding a Kurdish state. In contrast, the Islamic State has no such aims on Turkey and does not have the wherewithal to undertake such an enterprise—even if it wanted to. Turks have a long history of secularism and are not receptive to the strict Islamism of ISIS. For the time being, therefore, the Turkish state will pretend to be fighting ISIS while directing its violence towards the PKK and the YPG.

If the violence between the PKK and YPG and the Turkish state spirals out of control, it is highly likely that a military coup d’etat will take place against the AKP (the Islamic-based Justice and Development party of Erdogan). The military will jail leading government politicians, end democratic rule, wage war against the PKK/YPG, restore order, and then return power to civilian hands. This has happened three times in modern Turkish history—in 1960, 1971, and 1980. If conditions continue to deteriorate inside and outside Turkey, a coup is likely to happen again.