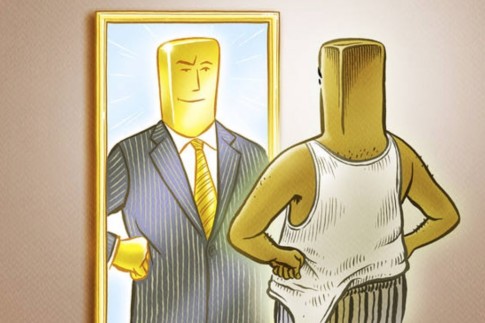 Mr. Market Gets Even

Yes, prices are being discovered again… by free declaration of buyers and sellers.

Owners of Greek stocks are discovering that their equity stakes aren’t as valuable as they believed.

But for every seller there is a buyer…

Sellers are losing money. Buyers believe they are getting a bargain.

You can obstruct price discovery and you can disguise and distort the real value of things. But Mr. Market will get even someday. He always does.

Yesterday, we mentioned but did not explain, that Alan Greenspan betrayed Mr. Market…

In 1987, after President Reagan appointed him Paul Volker’s successor as chairman of the Federal Reserve, Greenspan went over to the zombies… or more precisely, to their allies, the cronies.

The Largest Paper Money Racket Ever

In the late 1980s and early 1990s – you could almost see Greenspan struggling with the contradictions.

He had been loyal to free markets. But his job carried with it the biggest central planning authority of all time. He knew that currency unbacked by gold was a scam, but his position as chief of the Fed put him in charge of the largest paper money racket ever.

Greenspan believed in letting Mr. Market set prices. But as gatekeeper of U.S. credit, he corrupted more prices than any human being ever had before him.

But what was he to do?

In 1993, at her husband’s inaugural address to Congress, Ms. Clinton – now the leading Democratic candidate for president – chose to stand next to him. It was one of those magic moments in history, when power and money came together to celebrate.

(When we were in Vancouver, we went to an Anglican church. A banner hung down from the ceiling proudly proclaiming the trinity: “King, Country, God.” The parishioners like to imagine that all their leaders are united… It spares them the trouble of choosing just one.)

Of all the bigwigs in Washington, it was Alan Greenspan who had the biggest wig of all. He was practically a god to the members of Congress, to whom the economy was as big a mystery as Heaven itself.

To the American people, Greenspan was a combination of Mr. Fixit and the Wizard of Oz.

They didn’t understand a word of what he said. And why should they?

Greenspan made no sense when he spoke as Fed chairman – intentionally. As he later explained:

But the blither and blather worked. The politicians kneeled before him. The press took off their hats. And the masses, awestruck by the incomprehensible, thought he was a genius.

What was he supposed to do? Turn his back on all that for the sake of the truth?

“What was the truth?” asked the jesting Greenspan. And he did not wait for an answer.

We wrote contemptuously about Mr. Greenspan from the end of the 1990s until he stepped down as Fed chairman in 2006.

He did his thinking in the bathtub, the press reported. Alan “Bubbles” Greenspan, we renamed him.

He had sold out – for glory, for money, and for power. But we had to admit: He got a good price! Had we been in his shoes, we probably would have been bought at half the price.

But what a pleasure it was to rediscover the old Alan Greenspan, before he turned his coat and forked his tongue. Back in 1966, when he still believed in free markets and sound money, he expressed himself clearly. 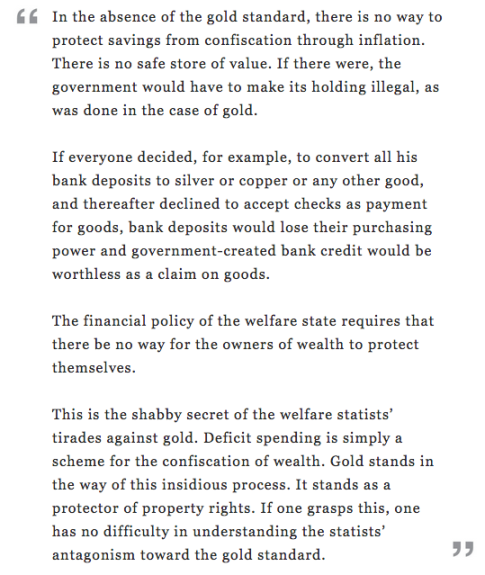 But now, who speaks the truth?

Because the elites – economists… businessmen… academics… policymakers – are paid not to see it. And if they do catch a glimpse of it by mistake, they keep their mouths shut.

Like Alan Greenspan, it is all very well to understand how things really worked. But you wouldn’t want to give up money, power, and status for it.

The Huffington Post explains how the cronies bought the economics profession: 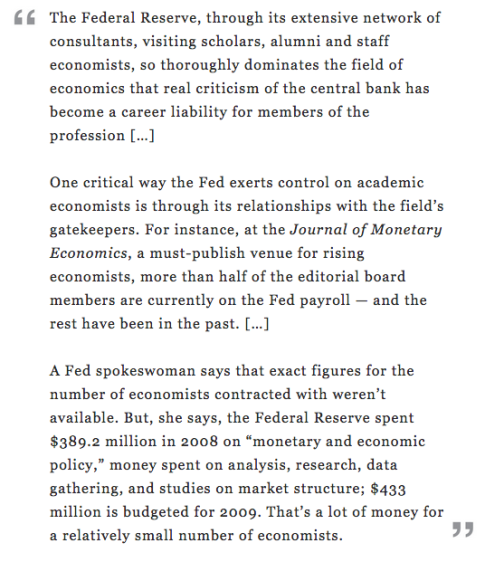 But the Huffington Post misses the really big story…

The feds have bought off the entire intellectual, financial, business, and academic establishment.

As we explained in our speech at the Sprott-Stansberry Natural Resource Symposium in Vancouver, there is scarcely a single public figure with substantial wealth or reputation who doesn’t owe it to the great credit expansion.

In 1999, for example, Fortune magazine named Jack Welch “Manager of the Century.”

Was it because of Welch’s genius… or the fact that GE had moved into financial services during a credit boom?

Warren Buffett is regarded as the greatest investor who ever lived. But it was Buffett’s great fortune to be investing during the greatest credit expansion there ever was.

And how did Ben Bernanke and Janet Yellen get to be heads of the Fed?

They could not have done so without the wind of credit expansion behind them, which seemed to make sense of their preposterous theories.

While the cheap credit embellished résumés and reputations, it also made people dependent. Academia reaped tax-free donations from people who had made their fortunes in debt-fueled finance… not to mention more than $1 trillion in tuition fees financed by the feds’ student loan program.

Meanwhile, Washington ran deficit after deficit – again, all made possible by cheap credit.

And now, practically every sentient being in the nation (and some Democrats, too!) needs cheap credit to pay his mortgage, keep his job, boost his stocks, and hold down his finance costs.

Who is left to speak the truth?