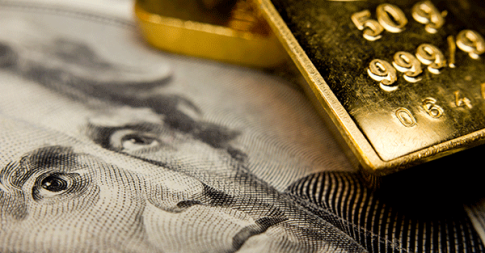 And that was the lowest price that gold has seen ever since.

In fact, after reaching its low in April 2001, gold closed higher for twelve consecutive years– something that had never happened before in ANY financial market with ANY asset.

Then came a correction; the price started falling, and gold is now on track for 2015 to be its third down year in a row.

What’s incredible is that, despite its history of gains, and 5,000 years of tradition behind it, gold is rapidly becoming one of the most widely despised assets.

But before we pronounce it dead and write the final gold eulogy, however, let’s consider the following:

1) Nothing goes up (or down) in a straight line. After 12 straight years of unprecedented gains with any asset class, it’s not unusual to have a meaningful correction.

(Just imagine how severe the correction in stocks will be. . .)

And like all frantic booms which go way past sustainable levels, corrections also overshoot fair value.

This correction in the gold market could easily last for several more years, with prices potentially well below $1,000.

But then we could just as easily see another massive surge all the way past $2,000 and beyond.

That’s the nature of these markets– to be extremely fickle (and highly manipulated).

Even over a period of a few years, the market can show about as much maturity as a middle school lunchroom, complete with pubescent gossip and inane popularity contests.

But it’s rather short-sighted to completely lose confidence in an asset that has a 5,000 year track record because of a few down years.

2) The gold price shed nearly 5% after the government of China announced recently that they owned 1,658 metric tons of gold.

This amount was lower than what many investors and analysts had been expecting, and the price of gold dropped as a result.

My question- since when did anyone start believing official reports from the Chinese government?

Seriously. The Chinese have a vested interest in understating their gold holdings.

They know that doing so will push the price of gold LOWER, which is exactly what they want.

China is sitting on trillions of dollars in reserves right now, a portion of which they’re rapidly trying to rotate OUT of US dollars.

So it’s clearly beneficial to the Chinese government if they can sell dollars while they’re strong and buy gold while it’s cheap.

And if they can push gold to become cheaper, even better for them.

3) Remember why you own gold to begin with.

Gold is a very long-term store of value. Notwithstanding a few down years, gold has maintained its purchasing power for thousands of years.

Paper currencies come and go. They get devalued, revalued, and extinguished altogether.

How much would you be able to buy today with paper money issued by the 7th century Tang Dynasty? Nothing. It no longer exists.

Even in modern history, the gold backing up a single US dollar from 1971 is worth vastly more than the paper currency that was printed 44 years ago.

But even more importantly, aside from being a long-term store of value, gold is a hedge— a form of money that acts as an insurance policy against a dangerously overleveraged financial system.

How much will your dollars and euros buy you in the event of real financial calamity? Or if there’s a major government default or central bank failure?

No matter what happens in the financial system– whether it collapses under its own weight, or cryptofinance technology revolutionizes how we do business– gold ensures that you’re protected.

4) Resist the urge to value gold in paper currency. We all have this tendency– we invest in something, and then hope it goes up in value.

But that’s a mistake with gold. It’s a hard thing for some people to do, but try to stop yourself from thinking about gold in terms of its paper price.

(It’s also important to remember that there’s a huge disconnect between the ‘paper price’ of gold, and the physical price of gold.)

Remember, gold is not an investment; there are plenty of better options out there if you’re looking for a great speculation.

5) Having said that, if you find it too difficult to do this, and you catch yourself constantly refreshing the gold price and checking your portfolio, you might own too much.

Listen to your instincts; if you’re always feeling frantic about the daily gyrations in the market, lighten your load.

Don’t love anything that won’t love you back. Stay rational. Own enough gold that, in the event of a crisis, you will feel comfortable that you have enough ‘real savings’… but don’t own so much that you’re constantly worrying about the paper price.

1 thought on “Some Clear Thinking About The Price Of Gold”