The cracks in the facade are starting to show… 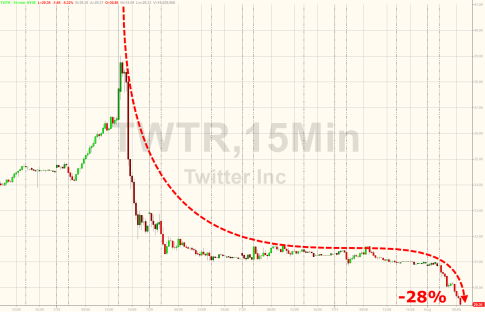 As we warned yesterday, it is different this time…

There has probably been no greater investing mantra placed upon an industry in recent memory than the now reflexive, as well as defensive response of “It’s different this time” when questioning anything Social. Trying to understand the business model along with its metrics, valuations and more is not only arduous, the response seems more akin to pulling teeth without anesthesia for those selling it, defending it, or both.

They can’t make money via the old model as to warrant their current valuations. So, instead of doing what they do, and doing it better, enabling higher net profits, it seemed they had better buy something that can. Even if the price paid (again a reported $1.5 Billion) is money spent not from net profits – but from Wall Street’s pocket. Because for all intents and purposes, where else did it come from when using GAAP they actually lost $68 Million last quarter?

All I can say, it appears someone made money. It just wasn’t LinkedIn, nor Wall Street, as they pounded its share price in one fell swoop some 10%. And so far, no one seems to be rushing in to buy at its now 25% plus or minus reduced “wonderful sale price” from where it stood only months ago.

How about Yelp™? Or should I say ouch? Because as of today that’s what many whom “invested” in this once heralded “social reviewing hot bed” are currently dealing with. And to spare many from yelping or howling more like dogs than what these stocks of late have morphed into. I won’t reiterate just how “clueless” I was scorned to be when I railed about other previous “darling” valuations and business metrics such as Groupon™.

This is the current, as well as ever-increasing pain of social reality coming to the entire social media space in my view. And I say “increasing” because I truly feel (and can argue the case) without QE – it’s over for this space as it currently stands today.

What portends for the space is how large some of these entities remain going forward, or, actually remain. That’s all up for debate. What’s not debatable or tolerable are the previous objections as to seek clarity to reasoned questioning about the business models, and/or viability going forward.