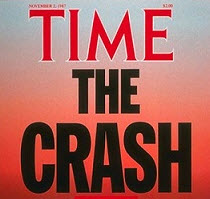 Life is full of irony. When I was in school, I hated history. It was boring. It was pointless. How was reading about a bunch of dead people ever going to be useful in life? Today, I consume everything I can find on history. Particularly, financial history. Ironic.

Of course, it only took me 25 years in the investment world to realize that human behavior is quite fascinating. The capacity for optimism is seemingly limitless, but the “sting” of failure is quite transient.

While it is in those failures that valuable lessons are taught, studies have shown that humans tend to suppress or substitute new memories over time.

“Those who cannot remember the past are condemned to repeat it.”

The phrasing itself certainly is catchy, and is often used in the financial media due to its underlying truth. If history is a guide to the results of previous actions, and those results were painful, then history should guide not only policy making (public and private) but our own behaviors as well.

It’s hard to disagree with. Over the history of the financial markets (all the way back to the 1600’s) speculative investing has repeatedly led to booms and busts. In 2007, as the markets were enraptured with the speculative sub-prime lending and real estate boom, I gave a presentation containing the following two slides on past history. 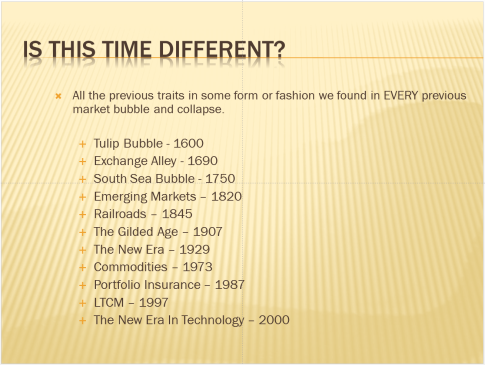 Of course, I need to the Real Estate/Financial Crisis of 2008 to that list.

Importantly, each of these “bubbles” involved an excessive level of speculation around some specific asset. In 2007, I highlighted (in red) the speculative levels of excess seen in certain areas. [Note: It is important to remember that in 2007 the financial media did NOT believe there was a bubble being formed and that there was NO excess in the markets.] 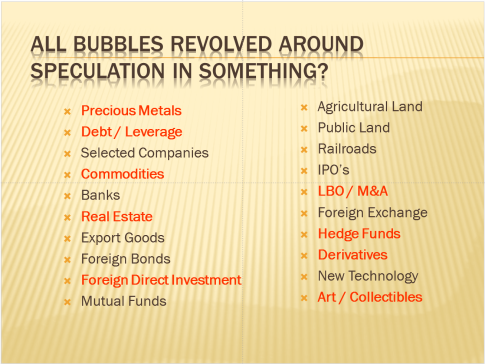 Of course, it is all rather obvious in hindsight. Valuations were high, the Fed was hiking interest rates and the love affair with stocks and leverage had reached historically high levels.

Today, there are many signs that the markets are once again approaching a “danger zone.” Margin debt is once again at historically high levels; valuations are the second highest in history and the “love affair” with equities has pushed stocks to record highs. But these areas are really just a reflection of the excesses that are building elsewhere in the financial system.

The following are some areas of excess that are suspiciously similar to history.

“For the wealthy, wine has become the ultimate liquid asset. With prices for top vintages soaring past $10,000 a bottle, fine wine is being bought, sold and traded at auction like a new investment class, with its own value indexes, investment funds and speculators. And now wealthy collectors are using wine as leverage — raising cash to invest in more wine and create even more wealth. …

Borrowers are mainly using the money to buy more wine, betting they can pick the winners that will surge in value, which they can sell to pay off the loan and make a profit — similar to buying stocks on margin. Other wealthy borrowers are using the money for divorces or tax payments, or to buy a boat or a car. And many of the wealthy, especially business owners, have frequent short-term cash squeezes.”

This corporate action falls broadly under the umbrella of ‘financial engineering.'”

“Demand for automobile debt in the U.S. is enabling lenders to make longer loans to people with spotty credit, stoking concern that car shoppers are being lulled into debt loads they won’t be able to sustain.

Of the subprime vehicle loans bundled into securities, 73 percent now exceed five years, up from 64 percent during the first three months of 2014, according to data from Citigroup Inc. Loans as long as seven years are increasingly being put into more bonds as auto-finance companies and Wall Street banks sell the securities at the fastest pace since 2007.”

“Southern California real estate agents are flogging a no-down-payment, no-closing-costs and no-mortgage-insurance product called the “wealth-builder” home loan, which allows individuals to renters to buy a house and rent it to themselves. Essentially the borrower takes out a 15-year term FHA loan and pre-pays 4% to “buy down” the loan interest rate from about 4.1% to about 2.5%.”

Art (via The Guardian)

“A painting by Pablo Picasso has set a new world record for the most expensive artwork to be sold at auction after reaching $179m (£115m) in New York.

Women of Algiers (Version O) had been expected to exceed $140m before the auction but the final price far exceeded those estimates in a sale at Christie’s auction house at a time when collectors’ appetite for masterpieces of impressionist, modern and contemporary art is increasing.”

“Introducing Triple Deuce, set to be the world’s biggest superyacht at a whopping 222 meters (728 feet) long.

At $1 billion, it will also be the most expensive private yacht ever built, costing more than the annual GDP of Western Sahara, the British Virgin Islands, and Micronesia.”

“The average apartment price in Manhattan hit a record $1.72 million in 2014, as the New York wealthy and overseas rich continue to seek safety in the New York skyline.

While sales volume is slowing, prices continue to rise in New York as strong demand competes for historically low supply. The average sale price for the year topped the previous peak in 2008, of $1.591 million, according to a report from Douglas Elliman and Miller Samuel Real Estate Appraisers.”

“The pending acquisition of the 158-room Mandarin Oriental in San Francisco will create a new record price paid on a per room basis. The sale price is going to be in the neighborhood of $1 million per room, according to multiple sources that are aware of the transaction, making the acquisition close to $158 million. The previous record was $650,000 per room that was paid by Chicago-based LaSalle Hotel Properties in February of last year for its $130 million purchase of the 200-room Hotel Vitale.”

I could go on with automobiles, planes, collectibles and other completely stupid $*#% all fetching record prices, but you get the idea. In an economy that is flush with liquidity, supported by low interest rates and wrapped in a speculative frenzy; there is little reason to worry about a downturn. But therein lies the potential lesson of history. We have been here before, but expect it to end differently this time.

The lessons of ignoring history are likely to be learned once again… the hard way.