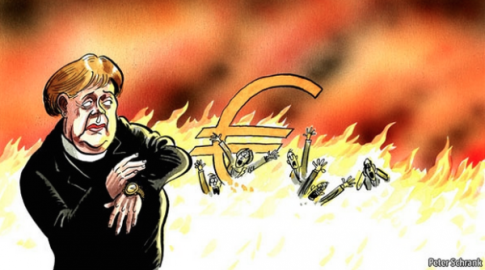 With the turmoil in Greece proving once and for all that in the absence of a fiscal union, the EMU simply cannot function or if it does, it will be subject to episodic crises stemming from endemic differences of opinion on fiscal policy, outsiders could be forgiven for looking upon the currency experiment as an abject failure.

Indeed, the struggle to secure a bridge loan for Athens last week underscored the degree to which non-euro countries are reluctant to put their taxpayers on the hook for problems which they believe are the result of an ill-fated attempt to unite fundamentally different economies and governments under a single currency.

Given the above, we weren’t surprised to learn that Poland and the Czech Republic are out voicing their reservations about running into what is effectively a burning building. Here’s The Telegraph on Poland:

Poland will not join the euro while the bloc remains in danger of “burning”, its central bank governor said.

Marek Belka, who has also served as the country’s prime minister, said the turmoil in Greece had weakened confidence in the single currency.

“You shouldn’t rush when there is still smoke coming from a house that was burning. It is simply not safe to do so. As long as the eurozone has problems with some of its own members, don’t expect us to be enthusiastic about joining,” he said. 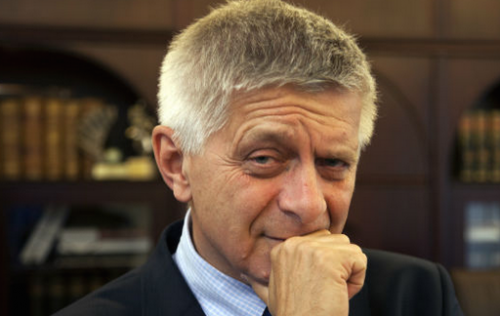 The governor suggested that Poland, which is obliged to join the euro as part of its EU membership, would not become a member for many years. He said interest would wane further if the political environment continued to shift to the Right.

Mr Belka, a former head of the International Monetary Fund’s European division, said the eurozone was at risk of becoming trapped in a “vicious circle” where closer fiscal integration became more difficult because of splits over structural reforms and austerity.

And from Bloomberg on the Czechs:

While “Greece is a eurozone member and other taxpayers including Czechs, would pay for its debt, I’m for postponing the euro adoption. Until Greece leaves the eurozone. I wish it would happen as early as possible.”

So while Poland supports Greek debt relief – and, as you’ll see in the interview excerpts below, opposes a further shift towards the fiscal doctrines of the EMU’s northern bloc – while the Czechs apparently want Greece out sooner rather than later, one thing they agree on is that charging into a burning building is a bad idea and as we’ve been keen to point out for the better part of three years, the EU is certainly on fire.

Full interview with Poland’s Marek Belka as originally posted in The Telegraph:

What do you think about the situation in Greece?

I think that what has been achieved provides temporary respite but not a solution. The real problem for Greece is how to reinvigorate sustainable growth. Without sustainable growth Greece will periodically fall into problems. But of course we expect that the reforms are going in a good direction. The problem is that normally it takes a lot of time for these reforms to have positive consequences.

Do you believe that Greece needs debt relief?

I would call it a debt reprofiling, rather than debt relief which is the same but sounds better and politically more acceptable. Either way, I think at one point sooner or later Greece needs it.

What are the chances of Poland joining the euro?

You shouldn’t rush when there is still smoke coming from a house that was burning. It is simply not safe to do so. As long as the eurozone has problems with some of its own members, don’t expect us to be enthusiastic about joining.

Does the eurozone need fiscal union to ensure it survives?

I think it does. I don’t think the euro area is solid enough without some elements of fiscal union. The only problem is, the more divergent the euro members are, the more difficult it is politically and economically to build such a union. I’m sure there will be no problem in setting up a fiscal union of some sort between countries of the north, so as long as there is divergence or as long as we have problems in some countries, it’s more difficult to build up a solid foundation for the real fiscal union in the eurozone. So this is a little bit of a vicious circle, but this is how we see it from our side.

What needs to happen in the eurozone to make it attractive for Poland to join?

The eurozone needs to grow solidly and build up a solid foundation for its currency, including elements of fiscal union and common economic policy. This is something that we cannot say fully determine upfront. It’s more of a moving target.

What is the mood music like in Poland for joining the euro?

The situation around Greece does not increase confidence in the euro, that’s for sure, and if we have a political change more into the right, then the enthusiasm to join the euro is going to be even weaker.

How long will it take for the eurozone to fix its problems. Can it be done within a generation?

We don’t have as much time as a generation. But it will take a while.

What does your time working at the IMF tell you about its role in the debt crisis?

I think it was quite unusual for the IMF to be part of a team of three, rather than doing it on its own. The programme was a compromise between what the IMF thought was most proper and the exigencies of European integration. So this is an uneasy alliance in the sense that the priorities of Brussels might be slightly different than the priorities of Washington. So it’s an uneasy task and unusual task. But on the other hand how can the IMF ignore the situation in Greece and other European countries? This would make the IMF less relevant in the world. So this is the product of certain circumstances and compromises.