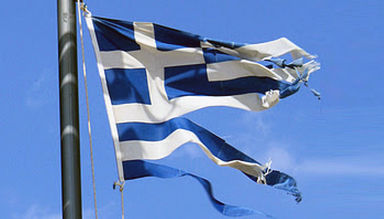 “The letter has been sent,” a Greek government official told MNI on Friday, referring to a formal (if begrudging) invite from Athens delivered to the IMF and the rest of the dreaded troika.

The trio – comprised of the IMF, the ECB, and the European Commission – was famously booted from Greece in late January by a rambunctious Yanis Varoufakis who proclaimed that Syriza, which had just swept to power on an anti-austerity platform, didn’t “plan to cooperate with that committee.”

Six months later and “that committee” has turned out to be quite a bit more resolute in its demands that Varoufakis (or perhaps anyone else for that matter) anticipated, as Syriza’s meteoric rise effectively sowed the seeds for its own destruction by emboldening like-minded parties across the periphery, effectively forcing the troika to harden its stance or risk a veritable rebellion against the EMU-wide push for fiscal discipline.

Earlier this year, a symbolic (and absurd) rebranding effort re-christened the trio “the institutions”, a name which creditors smugly adhered to until June 27 when, after PM Alexis Tsipras’ surprise referendum call forced Varoufakis to beat a hasty retreat from a Eurogroup meeting, Mario Draghi joked that at least finance ministers could go back to calling it the “troika”.

Now, a day after the Greek parliament legislated away its last shred of dignity (and sovereignty) by passing a second set of prior actions, the stage is set for the troika to return to Athens. Here’s Bloomberg with more:

Six months after former Finance Minister Yanis Varoufakis gave them the boot, Greece’s three main official creditors are sending representatives back to Athens within days, the European Commission said Friday. Their acceptance draws a line under the antagonism the Syriza government displayed in the afterglow of its election victory as Prime Minister Alexis Tsipras recognizes the pain required to save his country from economic calamity.

After tapping a 7 billion-euro ($7.7 billion) bridge loan to avoid defaulting on theEuropean Central Bank this month, Tsipras is racing to complete negotiations on a third bailout in five years before about 3.2 billion euros more comes due to the ECB on Aug. 20.

To release the funds, Tsipras needs to get past the troika.

The troika’s presence in the Greek capital has often been met with throngs of angry protesters lamenting years of austerity that saw the economy contract by a quarter and unemployment soar to the highest in the European Union.

A man was arrested in 2013 for throwing coins at then IMF mission chief, Poul Thomsen, as he arrived at the Greek finance ministry. Now European department chief at the fund, Thomsen requires 24-hour bodyguard protection whenever he visits Athens, on the recommendation of police.

The European team works out of a bullet-proof office with double security doors outside the center of Athens where there are no EU flags or insignia to attract attention. The former head of the commission’s team in Athens was guarded by an armed, plain-clothes policeman.

Last year, a bomb exploded outside the IMF offices.

Bullet-proof offices, security details, and bombs tells you pretty much everything you need to know about the reception creditors’ technical teams are likely to receive upon their triumphant return to what is now effectively a conquered nation and it also helps to explain what exactly officials mean when they say that the start of formal negotiations has been delayed due to “logistical issues.” From Reuters:

Talks on tying up a new bailout deal for Greece failed to start on Friday as had been expected, with officials blaming security worries for delaying the negotiations with international creditors who are detested by many Greeks.

But representatives of Greece’s creditor institutions – the European Commission, the European Central Bank and IMF – said they cannot begin until the right location is found, given the talks’ sensitivity and the wide public anger about austerity policies imposed under the first two bailouts.

“There are some logistical issues to solve, notably security-wise,” a European Commission official said. “Several options are on the table,” the official said, without giving more details.

So essentially, the troika are still trying to decide on a suitable safe house.

Ultimately, Greece will need to wrap up negotiations by August 20, when another payment to the ECB comes due.

If talks are not concluded by then, Athens will likely look to tap the remainder of the funds in the EFSM in the form of a second bridge loan. As we’ve explained on too many occasions to count, the ECB must be paid – even if “payment” involves the creation of  still more circular funding schemes – so Mario Draghi has an excuse to preserve the ELA liquidity drip that’s keeping the Greek banking sector afloat.

In the coming days, we’ll see if the presence of those who must not be named and who have succeeded in transforming Greece into a vassal state of Brussels will be enough to spark renewed social instability and transform Syntagma Square into 1965-era Watts (or modern day Baltimore).

“Varoufakis [once] said that ‘motorcades’ of the creditors’ representatives moving around the Greek capital were humiliating,” Bloomberg notes.

While that may be true, we suppose motorcades are better than tanks.

1 thought on “Troika Returns To A Conquered Greece Amid Anger, Security Threats”