– Hillary Clinton Sent Confidential Emails From Her Personal Email Account, And Now The FBI And DOJ Are Involved (ZeroHedge, July 24, 2015):

It’s not that Donald Trump needed help in his juggernaut campaign across the GOP presidential primary with his lead in the double digits at last check, but moments ago the flamboyant billionaire got an unexpected present from the WSJ which may have just crippled the chances of his biggest democrat competitor as well, Hillary Clinton.

WSJ reports that according to an internal government review Hillary Clinton, as former Secretary of State, “sent at least four emails from her personal account containing classified information during her time heading the State Department.”

This is in reference to the long-standing investigation surrounding whether Clinton i) used bad judgment in opting for a personal, and far less protected, email device as Secretary of State and ii) whether she had – in direct contravention of State Department policies – sent out confidential data on her personal Blackberry.

As a reminder, the Democratic presidential candidate has repeatedly denied sending out confidential emails from her own device, and instead used it purely in a permitted context. She has also repeatedly denied that the emails, which she has since “purged” despite receiving a Congressional subpoena to preserve, contained any sensitive materials, while deleting at least 30,000 emails which she specified were of a personal nature.

Today’s data confirms that the former first lady lied and has indeed used her email to send out confidential data on at least one occasion, or rather four:

In a letter to members of Congress on Thursday, the Inspector General of the Intelligence Community concluded that Mrs. Clinton’s email contains material from the intelligence community that should have been considered “secret” at the time it was sent, the second-highest level of classification. A copy of the letter to Congress was provided to The Wall Street Journal by a spokeswoman for the Inspector General.

But the shocker is that the 4 emails were revealed when the Inspector General scoured through just 30 of Hillary’s emails, suggeting that based on this random sample, Clinton was sending confidential data well over 10% of the time from her personal account!

But the worst news for Hillary is that not only the FBI but the DOJ are now getting involved:

As a result of the findings, the inspector general referred the matter to the counterintelligence division of Federal Bureau of Investigation. An official with the Department of Justice said Friday that it had received a referral to open a investigation into the potential mishandling of classified information.

It remains to be seen if anyone in the DOJ will take this case seriously even after these most seriously charges are brought forward, although if so, then the full banana republic farce of a nation where laws are meant only for some, will be exposed to the entire world to marvel at.

As for the final twist, the person who was taked with “identifying and preserving all emails that could potentially be federal records on Benghazi” was none other than Cheryl Mills:

If Congress really wants to get to the bottom of Hillary Clinton’s missing Benghazi and pay-to-play emails, it should call her consigliere Cheryl D. Mills to testify — under oath, and under the klieg lights.

A hearing featuring Clinton will be a wasted show trial with a lot of political grandstanding.

But Mills, who served as the former secretary of state’s chief of staff and counselor, knows where the bodies are  buried. After all, Hillary tasked her with “identifying and preserving all emails that could potentially be federal records.”

In short, Mills “is in the middle of it,” Judicial Watch President Tom Fitton said.

The same Cheryl Mills who, as we reported moments ago, is now dictating Clinton’s (and possibly US if Hillary is elected) tax policy and pushing it to be precisely what Blackrock, which is urging Clinton to revamp short-term capital gains taxes to benefit firms like Blackrock at the expense of activist investors, demands for one simple reason: she just happens to be on the Blackrock board of directors! 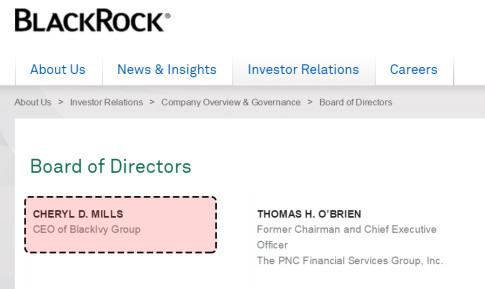 To summarize: the person who was in charge of combing through all of Clinton’s emails, and who is now on Blackrock’s Board and is telling Hillary what us tax policy should be, either was incompetent or simply lied to her boss, a boss who lied to reporters if not under oath.

1 thought on “Hillary Clinton Sent Confidential Emails From Her Personal Email Account, And Now The FBI And DOJ Are Involved”