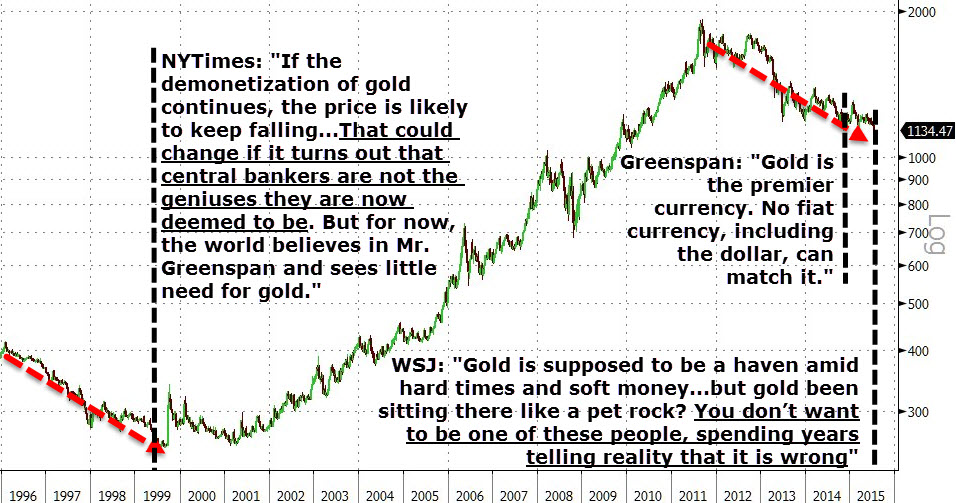 With the mainstream media onslaught against precious metals climaxing this weekend as WSJ’s Jason Zweig proclaimed gold “like a pet rock,” describing owning gold as “an act of faith,”we thought it worthwhile looking back at the last time ‘everyone’ was slamming gold and entirely enthused by the omnipotence of central bankers… May 4th, 1999 – “Who Needs Gold When We Have Greenspan?”

Who Needs Gold When We Have Greenspan?

Is gold on its way to becoming just another commodity? The people who run the world’s financial system are doing their best to secure that fate for the metal that once was viewed as the only ”real” money.

The process of removing the glitter from gold has been a gradual but inexorable one, and is one of the most telling counters to the argument that national governments are less important in this era of globalization. Much of the world is now quite happy to accept the idea that a greenback backed by Alan Greenspan is just as good as one backed by gold.

Actually, that measurement understates the amount by which stocks have outperformed gold. If you had owned stocks all those years, you would have received substantial dividends. If you owned a lot of gold, you got no dividends but did have to pay storage fees for the stuff.

That is, in fact, how the central bankers of the world look at gold these days. Michel Camdessus, the managing director of the International Monetary Fund, said last week he expected the fund to sell gold for the first time in two decades. The Clinton Administration is pushing for such sales by the I.M.F. to help finance a laudable program to forgive debts owed by very poor countries.

The money received from the gold sales is to be invested in Government securities that will provide income, and that income will pay off the loans. The implicit assumption is that gold, which does not pay interest, is a lousy investment.

A couple of weeks ago, the Swiss electorate voted to begin untying the Swiss franc from its gold backing. The Swiss central bank could begin selling gold as early as next year. Once again, the argument was that selling gold was a way to find easy money for good deeds. To those who still view gold as the only real money, having the Swiss defect is a bit like discovering that Rome is embracing Protestantism. It is the last place that should happen.

But it is happening, and it seems likely that more central banks — like the Australian and Dutch banks — will join those that have already begun selling gold.

Once gold served as protection for investors against governments that debased their currencies. Now there is plenty of debasing going on — the Brazilian real is down 27 percent this year — but the lesson people have drawn is to believe in the dollar. There is growing support for the idea that all of Latin America should adopt the dollar as a currency.

Dollarization, as that idea is called, amounts to a sort of a gold standard without gold. There would be a universal money whose value was based not on gold in the vaults, but on the wisdom of Mr. Greenspan and his successors at the Federal Reserve. Few fear that one of those successors might resemble G. William Miller, the Fed chairman in the late 1970’s who seemed to have no idea how to slow inflation.

If the demonetization of gold continues, the price is likely to keep falling as central-bank sales more than offset any increase in demand from jewelers or industrial users. That could change if it turns out that central bankers are not the geniuses they are now deemed to be. But for now, the world believes in Mr. Greenspan and sees little need for gold.

Not to mention a complete about-face by the very same Alan Greenspan:

Remember what we’re looking at. Gold is a currency. It is still, by all evidence, a premier currency. No fiat currency, including the dollar, can match it.

And the question is, why do central banks put money into an asset which has no rate of return, but cost of storage and insurance and everything else like that, why are they doing that? If you look at the data with a very few exceptions, all of the developed countries have gold reserves. Why?

So here’s a thought Jason: instead of quoting a Barclays analyst why “a lot of investors have become disillusioned with gold” and why “safe-haven demand hasn’t been strong enough to lift prices, but has only been strong enough to keep them from falling”, maybe you can try to figure out why that is the case.

Start by making a few phone calls to Citi or JPM and find out why their commodity/precious metal derivatives exploded as they did – as can be factually seen in the OCC’s Q1 report – at a time when gold has not only not risen following a surge in global risk, but has tumbled to its lowest value since 2010.

Because that’s what actual “reporters” do – they report, something the WSJ may have forgotten.

It appears the mainstream media’s total indoctrination of a narrative handed down by the central bank… in the face of central bank hording of gold – once again shows the desperation of the status quo to keep the dream alive (and suppress any signs of fragility) as The Fed moves to tighten.

Paraphrasing The New York Times from the 1999 lows in gold,

If the demonization of gold continues, the price is likely to keep falling as central-bank buys are nmore than offset byu paper manipulation. That could change if it turns out that central bankers are not the geniuses they are now deemed to be. But for now, the world believes in [Mrs. Yellen] and sees little need for gold.